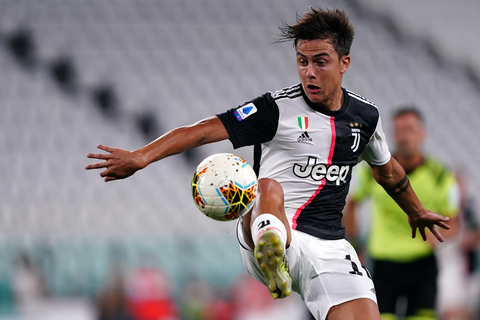 Rumours were rife about the Dybala transfer last season.

Paulo Dybala had endured one of his worst seasons at Juventus.

The Argentine attacker faced an existential crisis all of a sudden, as Portuguese superstar Cristiano Ronaldo completed his mega-money move to Turin.

Manager Allegri had to create a working formula that could incorporate both these players into the Bianconeri starting XI.

While Ronaldo took Italian football by storm, Dybala’s numbers paled in comparison to the 34-year-old.

The Argentina international’s poor form saw him amass 10 goals and 2 assists in 42 appearances, and earned a demotion to a substitute role in the later part of the season.

As Dybala felt he has no place in Allegri’s plans, he considered leaving the club and start anew.

A move to Manchester United or Tottenham Hotspur beckoned.

But then, Allegri lost his job.

And Dybala decided to try out his luck with Allegri’s replacement, Maurizio Sarri.

“I was close to leaving. That was in the club’s thinking, I knew. Until the last minute, we were waiting,” Dybala confirmed his intentions of leaving Juventus in a sit-down with The Guardian columnist Sid Lowe.

“I have two years left on my contract. That’s not a short time but it’s not a long one either. We’ll see what plans Juventus have, if they think I might leave in the next market or if they want me to stay. That’s a decision for the club to make. It’s hard to know because things change in a second. But I’m here, at a club that has treated me well. I’m happy, comfortable.

Sarri’s arrival has helped. He wanted me to stay, which gave me strength when we didn’t know what would happen. I knew he could teach me, help me bring out the best in myself.”

Dybala’s much-improved numbers of 13 goals and 12 assists in his first 35 2019/20 appearances suggest he made the right choice.

But, is it the right decision in the long haul?

Juventus is a great project

First of all, Juventus is determined to establish a European dominance, and the club has the right system in place to achieve that.

Other than Cristiano Ronaldo, the club has added the likes of Matthijs de Ligt, Danilo, Adrien Rabiot, Merih Demiral, Aaron Ramsey, João Cancelo, Douglas Costa, and Mattia Perin over the past two seasons.

The club has sky-high ambition, and any player should feel lucky to be a part of such a high-profile setup.

However, the prospect of becoming the central figure in a new club may also, seem enticing, for Dybala.

Because, fact is, with Ronaldo around, Dybala will never be the frontman of the Juventus show.

However, the pursuit of limelight doesn’t always go as planned.

The Brazilian superstar left Barcelona to crawl out of Messi’s shadow.

But he failed to take his career to the next level at Paris Saint-Germain, and is now reportedly regretting his decision to leave the Catalan giants.

Why Neymar to Barca is a dumb idea

Neymar would have been Messi’s successor had he been patient.

Dybala has to be patient and learn from Ronaldo

It’s the same at Juventus.

Ronaldo is now at the heart of all the action, but remember, he will celebrate his 36th birthday next February.

Juventus would need someone worthy to fill in his boots, and Dybala can be that person.

Moreover, how many players have had the opportunity to share locker rooms with both Messi and Ronaldo?

He has been struggling to find his identity for La Albiceleste, but under the tutelage of Cristiano Ronaldo, he can learn from the ultimate goal machine of all time.

He could develop the footballing intelligence and nous to coexist with Messi in the national team.

Under Sarri, Dybala had to overcome his initial difficulties of trying to link up with Ronaldo.

But he proved to be a fast learner.

Sarri’s first pairing of the duo was in Juventus’ 2-0 win over SPAL in September.

Standing in the technical area, the banker-turned-coach relished the view of a pin-point Dybala cross finding Ronaldo, who made no mistake in guiding it into the net.

Since then, Dybala has put in some fantastic performances sharing the pitch with the five-times Ballon d’Or winner.

Already a core element of the team, the future looks bright for “La Joya”.

Looks the Dybala transfer will have to wait.