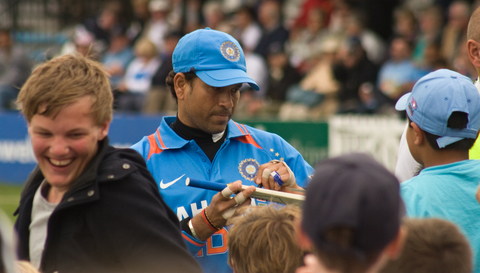 Virat Kohli vs Sachin Tendulkar is an evergreen debate.

Both are giants of cricket. Cricket fans, regardless of their nationalities, idolise these two maestros.

Both are the run machines of their era.

Tendulkar aka little master has ruled over the cricket fraternity for over two decades.

And now, his protégé has taken over.

There is always a debate about who is the better batsman between the two. It is a difficult one and can’t be answered without critically evaluating the stats.

Both these players have scored a tremendous amount of runs in international cricket.

But analysing how and when these runs were scored is important.

For instance, Tendulkar scored over 34000 runs in his international career in 664 matches. Kohli, on the other hand, has already amassed more than 21000 runs in approximately 400 international innings.

And he is showing no signs of stopping, just yet.

Sachin bid goodbye to international cricket at the age of 40.

By extrapolating Kohli’s batting average and years left, we can safely say that he will surpass the little master.

Not just in terms of runs scored, but also centuries.

However, that alone cannot be the indicator of one being better than the other.

We’ll have to consider other stats as well.

Virat Kohli completed 10000 in ODI matches last year and managed to achieve this milestone in 205 innings. In comparison, Sachin took 259 innings to reach this mark. Kohli beats Sachin in this regard.

Moving on, both of these batsmen have hit a huge number of centuries.

However, Kohli is a long way off from as many international matches. It’s likely that if he goes on to play an equal number of matches, he will most probably break Sachin’s record.

Sachin had an average of 44 in ODIs while Kohli plays with an impressive average of 59.3.

Moreover, the test averages of both the players is over 53.

Another key indicator is strike rate. In ODIs, Kohli’s strike rate is around 93 as compared to Sachin’s 86.

Kohli has a better average in ODIs. However, we need to look beyond mere numbers.

The reason is – When Sachin played, the batting average of other players was much lower as compared to in Kohli’s era. The same is true for the strike rate as well

In Tendulkar’s era and especially in his early years, batting average of other batsmen was around 27 while these days, it’s more than 31.

Moreover, strike rate of other batsmen in Tendulkar’s era was around 71, it is over 81 these days.

When we consider this fact, we can see that Tendulkar was much ahead of the players of his time as compared to Kohli.

Virat Kohli – the king of the chase

One aspect that completely sets Kohli apart is his ability to chase and adjust to conditions.

That is not a mere stat but speaks loudly of a player’s ability to win matches. Which makes it a vital metric.

It is not easy to compare these two.

But it’s likely that Virat Kohli goes on to play an equal number of matches as Tendulkar, he’ll outscore him.

Looking at Kohli’s physical fitness and hunger, it is safe to say that he won’t stop till he gets there.