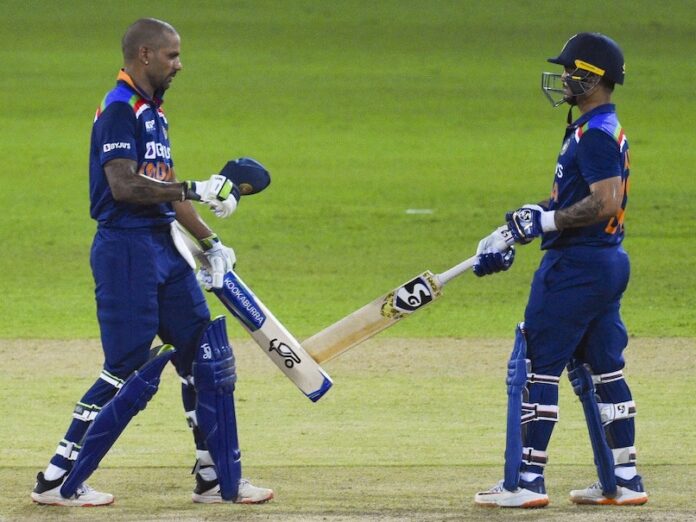 The first recognized ODI was played on 5th January, 1971 and since then over 4,000 of them have been played. The gentleman’s game has come a long way since then and developed into the super sport that it has become today. But in how many of these 4000+ matches do you think the winning captain thigh-fived himself after winning the toss and pointed straight to the dressing room indicating that they will be batting first and that too when there are 5 youngsters debuting in that team. Any takers?

NO! We certainly didn’t think so.

Sri Lanka started off well but after the 10 over mark, they started losing wickets in a flurry and had it not been for Karunatne’s 43 of That’s Captain Gabbar a.k.a Shikhar Dhawan for you. Now mind you, this was his first ever series as a captain and yet the sheer audacity, the sheer nonchalance and the sheer free will to live in the movement and enjoy the game for everything that it is makes our gabbar one of the most carefree yet destructive batsmen in the world. During the third ODI between the both teams, Dhawan thigh-fived himself and roared pointing to the dressing room that he has finally won the toss after being on the loosing side of it in the first two games and then chose to bat with so many debutants aching to go out there and make a name for themselves.

During the halftime, the Lankan team might have found a little momentum going back to the dressing room with at least something to Shikhar has come a long way since his ODI debut in 2010 against Australia. He is now one of the most experienced players in the team after Virat and Rohit. He has become more dependable and solid with age and his numbers certainly have started showing that too. Not just in the one day format but also in the shorter format his numbers have started improving drastically. Currently he is the orange cap holder in the IPL too with 380 runs in the tournament which had to be postponed due to covid and is set to resume in September.

Shikhar Dhawan the batsman was quite good in the series, he scored 128 runs in the 3 match series and helped India secure a comfortable series win over the Lankans. He played a brilliant unbeaten innings of 86 in the first ODI.

India did not just chase the target of 263, they bullied and buried it. They finished off the chase in just 36.4 overs with 80 balls and 7 wicIf Dhawan the batsman was good, then Dhawan the Captain was fantastic. Some of the calls he made in between the games were quite innovative yet very effective. In the first two ODI’s Sri Lanka had gotten off to a very fast and solid start and then it was Dhawan who decided to bring on Chahal or even Kuldeep sometimes quite quicker then they usually are called to bowl and such decisions proved to be absolutely wonderful. There was quite the flurry of wickets after these calls. Even in the later stages of the game when a partnership was building or there was a bold call required to be made, Gabbar always had the answers and was willing to go the distance. This went a long way in helping India clinch the series quite comfortably.

India did not just chase the target of 263, they bullied and buried it. They finished off the chase in just 36.4 overs with 80 balls and 7 Now with the India vs Sri Lanka T20I’s too, it can be expected that Dhawan will be India’s ace player both with the bat and with his captaincy as well.

“Where there’s a will, there’s a way” and this is what summarizes Surya Kumar’s journey – years of knocking on selectors’ doors, scoring here, there and everywhere. Being overlooked or not considered to be good enough, only a few would have persisted to keep their calm and kept giving their best. Yet Surya has gone and done beyond that. With every ‘No’, with every rejection he just worked harder and became even better than he was yesterday and boy did his efforts pay off! He was already too good! Someday, someone had to come looking right?

In the domestic circuits and the IPL as well, Surya had already shone brightly like a star, just like his name, in every tournament and competition he played. Now when the big boys came calling to play at the very top elite level, he was ready to be a star here too.

Debut One Day series for team India and guess what?

He is the Man of the Series for India vs Sri Lanka ODI’s. In his first series.

If that doesn’t tell you about the importance of never giving up, nothing ever will and that’s not the end of the story here. In India’s first T20 game against the Lankans, Surya Kumar Yadav or S.K.Y as they call him, was again India’s biggest weapon wherein he score a scintillating 50 runs of 34 balls on a very hard surface that proved to be the decider between both the teams.

And that’s not it, with the sheer dominance, hunger and the quality that he has shown, Surya Kumar Yadav and Prithvi Shaw have been called in to join the Indian test team for the upcoming series vs England in England. After making his mark in the One Day and T20 formats, maybe it’s time for the world of Test Cricket too, to see the genius of this 30 year old masterclass who might have been selected a little late to the International scene but he certainly is bossing it and how.

He should be India’s biggest Ace in the Upcoming T20 World Cup. We certainly think so.