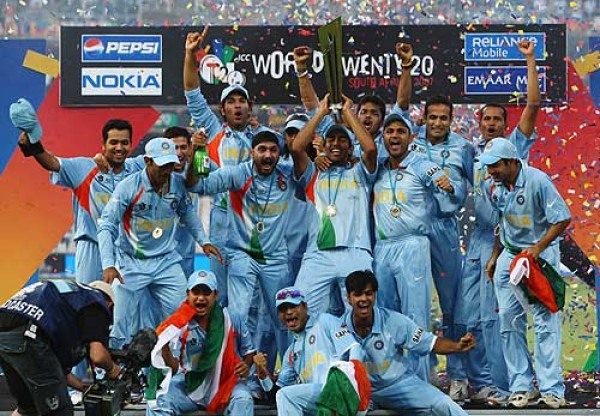 Ever since this new format of the game was introduced to the cricketing world, it became an instant hit. Especially in a country like India where after the disappointing run in 2007 50 Over World Cup, things did not seem good in Indian Cricket. The fans too were disappointed and then came this new format. We have to be honest, at the beginning, no one took this format as seriously as they should have. India sent a young Dhoni as a captain with a completely young team at his disposal to compete in the inaugural T20 World Cup. The rest as they say is history. India was crowned the champion in the newest format and the nation erupted with joy.

Now if you look at the tournament and look into the details, there were many reasons why the tournament and the format became so popular in India. Firstly, remember the game against Pakistan in the group stage where the scores were tied and India and Pakistan played a bowl-out to decide the winner of the game?

When did you see something like that before or after that again?

And that too against a team like Pakistan – India’s arch-rivals.

And the fact that India scored their first three and Pakistan lost all three hits, made it even more dramatic.

And then came the game against England. Flintoff was the big bully in the cricketing world at that time. And not just with his brilliant game but with his words and actions too. But alas for him and Stuart Broad he tried to mess with someone he shouldn’t have trifled with. And the rest that followed is one of the most historic moments in cricket. Yuvraj Singh hitting Broad for 6 sixes after Flintoff made him angry will be one of the most iconic moments in Cricket and something the Indian fans will always go crazy about.

India had to play the World Champions Australia in the final and that too with a young team. There were nerves and jitters and on the other end, there were the finest players of the game and someone who had so much experience playing in the big games and winning big tournaments. But guess what? Dhoni and his men somehow stood the test of time and patience and marched ahead. Remember Sreesanth’s iconic celebration of hitting the pitch with both hands after he dismissed Mathew Hayden?

And then came the big day and the dramatic final – The finals against arch-rivals Pakistan.

It was like the world had come to a standstill. And when these two teams played that brilliant final, the game kept swinging from one end to the other. It was as close a match as it can get and then came the final over when anything could have happened. But that Joginder Sharma over and that Sreesanth catch – India became the T20 Champions and created history. It is still remembered as one of the best ICC tournaments of all time.

And needless to say, the T20 format became an instant hit for Indian fans and even for fans all over the world. And before the T20 hangover would come down, Lalit Modi capitalised and gave Indian Cricket and the Country – the best gift he could have – The IPL. Players from all over the world were pooled in for one major league and big amounts of money were rolled out to players. The format too became an instant hit. And 14 years from then, the IPL is one of the biggest tournaments in the world across all sports.

India’s win in the inaugural T20 World Cup is one of the biggest reasons for that.