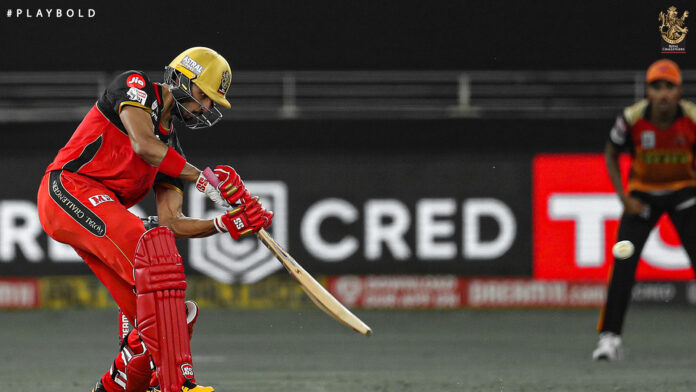 It was a great day for young Karnataka opener, Devdutt Padikkal.

Not a well-known name before today, he made the world take notice with a beautifully crafted 56 off 42 balls, studded with 8 fours.

AB de Villiers (51 of 30) provided the late momentum to take RCB to 163 for five after they were sent in to bat.

But first, let’s talk of Padikkal.

Now Karnataka has a tradition of producing technically correct batsmen who are also pleasing to the eye.

Starting with Gundappa Vishwanath, the tradition continued with Sudhakar Rao, followed by Rahul Dravid and on to KL Rahul, Padikkal is one more name in that list.

Though it is too early to anoint him with greatness, he certainly looks like a great find for the RCB.

Though only 20 years old, Padikkal is perfectly balanced at all times, even while playing the pull and the cover drive – something the purists will note.

Padikkal started with three boundaries in an over off left-arm pacer T Natarajan.

He reached with 50 with an aggressive sweep – something which showcased his confidence as batsmen typically try to play safe while approaching a batting milestone.

In contrast, Aaron Finch (29 off 27) played a subdued innings.

De Villiers slammed 51 off just 30 balls and was run out to a great piece of fielding by Manish Pandey. But his 4 fours and 2 sixes were vintage AB shots and helped RCB reach 163. Incidentally, he also hit his 200th six in the IPL.

SRH got off to the worst possible start when their main batsman, Dave Warner was needlessly run out in the second over!

But Manish Pandey who came in at No. 3 and Bairstow steadied the ship with a vital 71 run partnership.

The Sunrisers were on course for a comfortable chase with Jonny Bairstow (61) looking in ominous touch.

Bairstow struck 6 fours and 2 sixes in his 43 ball knock.

But then, Bairstow had a rush of blood and took a needless risk against Yuzvendra Chahal in his last over.

There was NO NEED for the shot at that stage!

Bairstow went for an audacious slog shot, made no contact with the ball that thudded on to the stumps.

RCB couldn’t believe their luck at the prize that had suddenly dropped into their lap!

The wicket fired up Chahal who is a confidence bowler!

Give him one early wicket and he gets transformed.

Inevitably, the flood gates then opened.

There was no need for this uncalled act of bravado, especially as their allrounder Mitchell Marsh was injured and unlikely to bat.

Even the asking rate was well under control.

Dave Warner would have banged his fist on the table and asked – WHY? WHY?

Chahal removed Vijay Shankar in the 16th over to tilt the game decisively in his team’s favour.

Chahal delivered when it mattered.

When the pressure was maximum, Chahal came up with magical deliveries, justifying skipper Virat Kohli’s faith in him.

Bairstow gifted his wicket to Chahal but the ball that got Shankar was a perfectly placed googly, worthy of being framed for eternity!

One of the best balls ever seen in this IPL, for sure.

Shankar’s wicket rattled the Sunrisers. Next, India’s Under-19 captain Priyam Garg and Abhishek Sharma played like headless chickens, virtually throwing away their wickets.

Abhishek and Rashid had started panicking so much that they even ran into each other while taking a run and collided in the middle of the pitch.

Things were already going out of control when the express pace of Navdeep Saini made its entry and knocked the stuffing out of SRH.

Rashid Khan and Bhuvi – both found their stumps doing multiple cartwheels as Saini cranked up the pace.

Mitchell Marsh suffering an ankle injury while bowling meant he came at number 10 and could only last a ball.

The only disappointment for RCB was Umesh Yadav who gave away 48 runs in four overs.