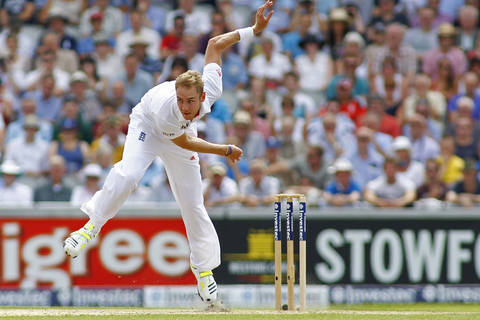 Anger is the ultimate motivator.

Rage is the finest performance booster.

Are we getting carried away?

Maybe! But we saw a vivid demonstration of this as England has just won the 2nd test against the Windies by 113 runs.

And if there is one man who made this win possible through the sheer force of his will, it’s Stuart Broad.

It is clear that Stuart Broad was a man on a mission.

The 34-year-old, England’s leading wicket-taker over the past two years, was gutted at being left out of the 1st test.

Well, emotions are a sportsman’s best friend, if channelised correctly.

Tennis legend Ivan Lendl spoke about how he decided to ‘never forget the disappointment’ on losing the US Open final to Jimmy Connors. He used that as a raw material to become an 8 time Grand Slam championship winner.

Broad did the same thing.

Firstly, full credit goes to Broad for being candid about his feelings.

He told the press before 1st test, “I’m not a particularly emotional person but I’ve found the last couple of days quite tough. To say I’m disappointed would be an understatement.”

“I’ve been frustrated, angry, gutted – because it’s quite a hard decision to understand. I’ve probably bowled the best I’ve ever bowled in the last couple of years.”

“I felt like it was my shirt, having been in the team through the Ashes and going to South Africa and winning there.”

Broad was brave about it and sought feedback – something that requires guts, instead of sulking and retreating into a shell.

He spoke to Ed Smith, the national selector, about his future who reassured that England’s door was still open for him.

When the 2nd test started, it became obvious that Broad was still hurting.

Still smarting from his omission, he made a stunning impact in the 2nd test when England had no Anderson, no Wood and yes, no Archer.

It was like Broad was cocking a snook at the England management for dropping him.

But thankfully for England, West Indies was at the receiving end of his fury.

The match seemed to be drifting, the pitch was sleeping and West Indies were batting diligently towards safety, when Broad intervened.

His weapon was the second new ball.

But Broad combined it with his inherent aggression to produce a wicked potentially match-turning spell.

West Indies had been cruising, on 235 for four after 80 overs.

But, in the space of 14 deliveries from the Jimmy Anderson End, Broad took three wickets for one run, awaking the game from its slumber.

It was vintage Broad.

The old magic had returned.

His first victim was Shamarh Brooks trapped LBW for 68.

Then, Jermaine Blackwood was bowled for a duck with a nasty straight ball zipped after hitting the pitch. Quickly followed by Shane Dowrich lbw, trapped on the back foot.

Blackwood and Dowrich, both went for zero.

Had it not been for the calming presence of Roston Chase, the Windies may have been compelled to follow-on.

In the 2nd innings too, Broad chipped in with 3 vital breakthroughs.

Tellingly, 5 out of Broad’s 6 victims were LBW or clean bowled.

Once again evidence that his aggression didn’t affect his accuracy.

Jofra Archer is all set to be back for the 3rd test.

With Stuart Broad back to his best, England’s pace bowling attack now looks world-class, yet again.