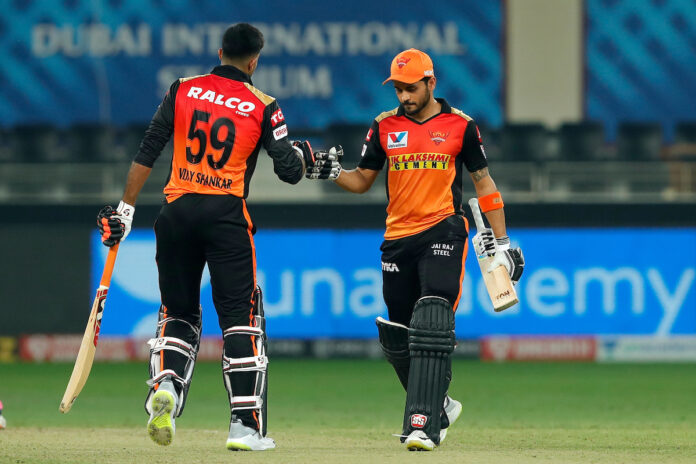 It was a must-win match for both Sunrisers and Rajasthan Royals but ultimately SRH prevailed.

The standout performer for SRH was Jason Holder who registered his best IPL bowling figures of 3-33. On the batting side, Manish Pandey (83*) and Vijay Shankar (52*) held their nerve and strung together a 140 run partnership and took SRH home.

In the end, it was a comfortable victory with 11 balls to spare.

At one stage, this must have looked unlikely when SRH were 2 down with just 16 runs on board.

The chief destroyer was Jofra Archer who must be cursing the IPL rules that stipulate a bowler can bowl just 4 overs!

There is no better sight in international cricket today than watching Jofra Archer in full flow.

Yesterday was one such day when Archer struck the right notes from the first ball itself.

Archer was smiling and looked relaxed before the match, which revealed his positive mindset and self-belief.

David Warner was soon at the receiving end of this when Archer beat him 3 balls in a row.

The 1st two were immaculately pitched out swingers that drew the batsman towards it, like a Venus Fly trap draws an insect. The only reason Warner survived is that his reflexes were a bit too slow while coming towards the ball and probably, someone in the stands was praying for him.

The third ball resulted in a streaky four but in the fourth ball, the relentless perfection of the Archer delivery overcame the power of prayer as Warner edged to Stokes, positioned at second slip.

A fine catch to dismiss a fine batsman. Though Warner looked annoyed, a bout of introspection will reveal that he should have no complaints about the ball that got him.

While Archer’s first dismissal was poetry, his next was about brute power.

A 149 mph rocket squeezed its way through the tiny space between Bairstow’s bat and pad, a space which he didn’t even know existed and SRH were reeling at 16 for 2.

Pandey and Shankar stand up

Defeat was a definite possibility when Bairstow got out.

What’s more Ravi Shankar hadn’t really justified his place in the SRH side till now but yesterday he set the record straight.

At one stage, he had scored 10 in 18 balls but the sight of Manish Pandey stroking the ball fluently at the other end must have been a soothing sight and more importantly, allowed Shankar to play himself back into form.

Shankar hit 2 sweetly timed fours against Shreyas Gopal and then upped the ante by doing the unthinkable! He smashed Jofra Archer for three consecutive fours, proving that he is a confidence player.

He scored 52 off 51 balls. Warner must be pleased that the batting responsibilities will henceforth more evenly distributed as Shankar comes in at a key 2 down position.

His brilliant 83 not out off 47 balls, contained four fours and an eye-popping eight sixes at a strike rate of 176!

The shot of the day was a half-volley from Stokes on the leg stump which Pandey whipped over deep square leg. And when Stokes reverted with a bouncer, Pandey pulled him over deep midwicket off the front foot.

Pandey brought up his fifty in just 28 balls.

Holder was a buzzing presence and brought energy and a winning spirit to a team that needed it badly.

No wonder, he is rated as one of the finest man managers in the modern game.

Playing his first match this season, Holder dismissed Sanju Samson (36) and then Steve Smith (19) and Riyan Parag (20) on consecutive deliveries.

He also affected a run-out to dismiss Robin Uthappa (19) in the fourth over. Uthappa, looking for a quick single and charged towards the other end with Stokes rooted to his end.

Holder was lightning quick and pulled off the perfect direct hit at the bowler’s end to find Uthappa short.

A moment of brilliance that knocked the stuffing out of the Royals.

Dismissing Ben Stokes was also key to SRH’s chances as he had nicely played himself in to score 30 off 32 balls.

But in the 13th over, he fell to the wiles of Rashid Khan who cleaned him up.

And when Butler fell in the 16th over to Ravi Shankar, the Royals knew that they had lost their last chance to post a fighting total.

With this win, SRH are fifth in the table with 8 points, the same as RR who have played one match more.

Will BBL 2020 be lucky for the Hobart Hurricanes?