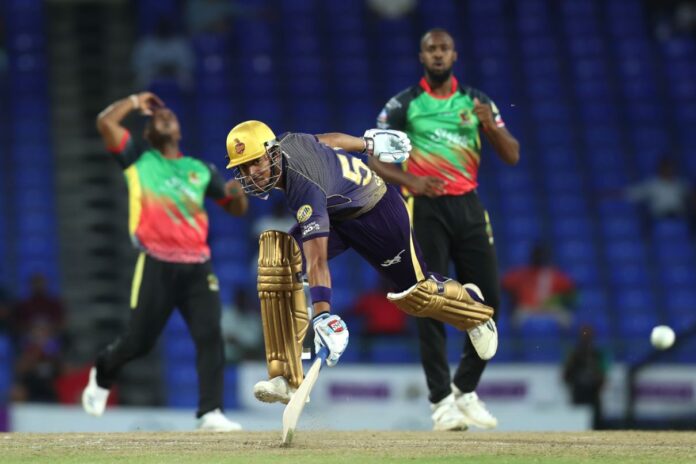 Looks like it’s all over for St. Kitts and Nevis as they lost abjectly to Trinbago Knight Riders who made it eight wins in eight matches.

The margin of defeat was a spirit-crushing 59 runs.

They were without their big guns. No Kieron Pollard, Sunil Narine, Fawad Ahmed or Jayden Seales.

But what difference did it make to the final outcome?

In one word, nothing!

This time, Lendl Simmons stepped up and grabbed the initiative with a brilliant attacking display.

Simmons is the CPL’s 2nd highest run-getter and yesterday, he showed exactly why he is considered such a prized player in the T 20 format.

Even Amir Jangoo, his opening partner eschewed all risk and played sensibly.

But Jangoo was the first to fall, run-out trying to pinch a single off Cottrell in the third over, when the score was just 15.

Colin Munro came in at 3 but soon retired hurt, leaving TKR in a potentially dangerous situation at 29 for 1 in six overs.

Simmons and Bravo come to the party

But this was swiftly corrected with an innings that will be long remembered in CPL history.

Simmons made 96, off just 63 balls with seven fours and six sixes. It was cool, calculated and murderous assault, that came at a time when TKR needed it the most.

Admittedly, Bravo was in all kinds of trouble against Rayad Emrit.

But Simmons, with periodic boundaries, kept the scoreboard ticking.

With his third six, Simmons brought up his maiden fifty of CPL 2020.

The partnership yielded 130 in 14.3 overs with Bravo contributing only 36.

But it ensured that TKR reached an imposing 174 for 4, which was never going to be easy for the Patriots.

Simmons looked set for a century but fell 4 short as he attempted a big shot off Dominic Drakes and holed out to Cottrell at deep midwicket.

Left arm spinners Akeal Hosein and Khary Pierce are not exactly what you would as world-class spinners.

But they know their limitations and have nagging accuracy.

Against the under-confident Patriots’ opening pair of Evin Lewis and Chris Lynn, this was always going to be a factor.

The first two overs yielded little which put Lewis under pressure. Trying to force the pace, Lewis tried to cut Pierce and managed to hit the ball to an alert Tambe who took a splendid diving catch, defying his age and also, the force of gravity.

Joshua Da Silva looked like he wanted to stay put for a long time. He played patiently till a rush of blood got him in the 12th over. The result – caught and bowled off Tambe.

This affected Lynn’s concentration and he departed the very next over, falling to a Sikandar Raza catch off Bravo.

What happened next was a collapse you associate more with a pack of cards. The Patriots went from 83 for 3 to 94 for 6 as Ben Dunk, Denesh Ramdin and Drakes fell in the next four overs. Sikandar Raza was the chief destroyer with all 3 wickets.

The final resistance came when Patriots captain Emrit and Imran Khan added 17 but it was too little, too late.

The game was effectively over. Pravin Tambe once again proved his value with a controlled spell that yielded only 12 runs in 4 overs.

Though there are many matches left, TKR are proving to be one of the strongest and most balanced teams with the correct blend of youth and proven performers.

The shrewd decisions during the auctions seem to be paying for, for this Shah Rukh Khan owned team.

LSG vs RCB Preview, Stats, Playing XI And All You Need...