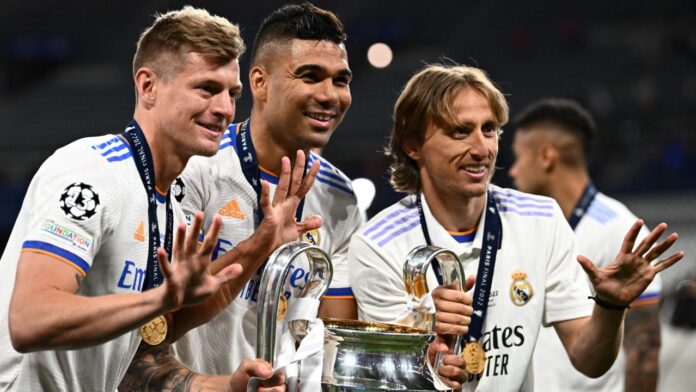 Winning is a habit.

You might have all the talent and all the form in the world. You can make big bold claims and keep beating teams one by one showcasing your dominance. But when it boils down to that one big game where it’s make or break, you just don’t need your talent.

What Benzema and company have achieved will go down as one of their best seasons ever. They did not have the hugely rated trio of Messi, Neymar & Mbappe. They did not have Salah, Mane, Van Dijk or some of the biggest names who have been making the headlines. They did not have a big and dominating squad like Manchester City. They did not have a very deadly team like Bayern Munich which everyone fears to play against. But what they did have is a group of players who know how to play together as a team and back each other’s strengths and weaknesses.

Remember who they lost during the group stage to a team whose name not many might have heard of. How they could have struggled to qualify and how everyone was looking through to the next season till they made more signings. But they believed in themselves when no one else did and now the result is very clear and in front of us for everyone to see.

They were struggling against PSG. After being outplayed in the 160 minutes out of the scheduled 180 and trailing by 2 goals, they still found a way to come back and come back in style. Then they did the unthinkable again. After being down for almost the whole 180 minutes across two legs and still trailing by 2 goals with only two minutes remaining, they did the impossible. They scored two goals in two minutes against a team like Manchester City and that too in the semi-finals.

And then in the finals when they faced a superb team like Liverpool, who some say is the greatest Liverpool team ever, they were still considered the underdogs. And boy they took that personally and defeated Liverpool 1-0 in the finals in Paris. Poetic isn’t it?

Real Madrid are the champions of Europe yet again.

And this time no one believed in them or even gave them a chance during the beginning of the season.

But now they have the trophy to themselves and they have re-written history.

This is the power of not giving up.

This is the power of believing in yourself.

The White Ball Domination Continues As England Win Yet Another World...