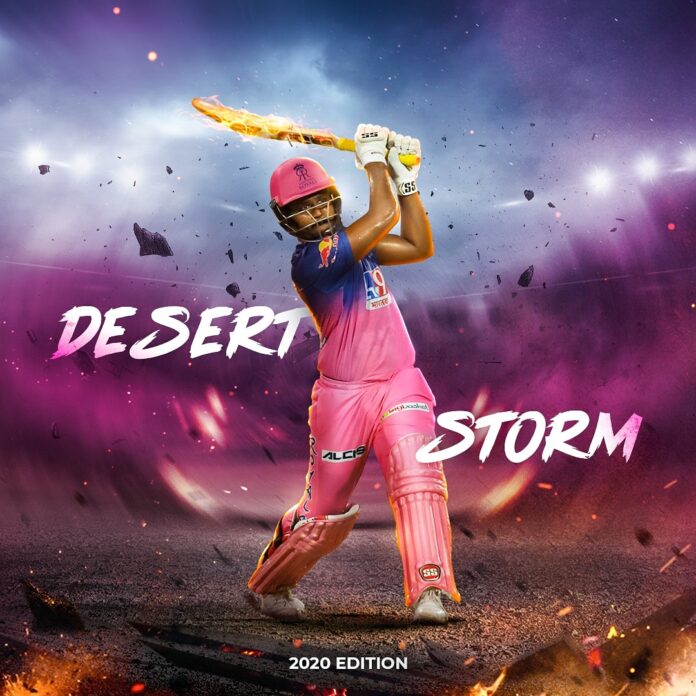 When it was announced that this year’s IPL would be hosted by the UAE, there were many who suggested that the matches would be slow affairs.

While the three matches prior to this one did show moments of slowness, they all turned out to be nail-biters.

Chennai Super Kings won the toss and put Rajasthan Royals in to bat.

The Royals started off quite tentatively as it was only in the third over that they scored their first boundary while also losing an early wicket in the form of Yashasvi Jaiswal.

This bought out skipper Steven Smith and in his company opener Sanju Samson began to let lose. The next four overs all went for a lot of runs with Piyush Chawla’s over producing 30 runs.

By the first timeout after 8 overs, Rajasthan Royals were already scoring at a rate of 12 runs per over. Chawla’s bad night continued as he was carted for 19 runs in his second over.

By the time Lungi Ngidi dismissed Sanju Samson in the 12th over, he had already clobbered 74 runs from 34 balls and had set a solid foundation for the rest of the Royals to take the team to a mammoth score.

However, the scoring rate slowed down a bit with the unfortunate run out of David Miller who did not even get to face a single delivery while Robin Uthappa ended up holing out trying to cart Chawla for a six finally giving the spinner something to cheer about.

The scoring rate after this would be rather subdued for the next few overs and it seemed like CSK had managed to put the brakes on RR’s chances of getting to a big total especially since Steven Smith lost his wicket to leave RR 7 down in the penultimate over.

However, there was one final flourish left in the form of Jofra Archer who plundered 30 runs from the final over to completely ruin Ngidi’s figures and lift Rajasthan Royals to an imposing 217.

CSK needed to show intent from the very first ball to overhaul this target and they had the license to do so with a deep batting line-up that featured some of the best hitters in the world.

Sadly, this intent seemed to be in short supply as CSK would lose 4 wickets by the 9th over while only managing 77 runs. Up until then, only Shane Watson showed any inkling of scoring at a rate close to what was needed.

However, it was Rahul Tewatia who was providing all the body blows accounting for 3 wickets while yielding just 21 runs. From the 10thover onwards, Faf du Plessis and Kedar Jadhav would rebuild the innings but they would take up too much time, dealing mostly in singles and doubles.

By the time Jadhav fell in the 14th over CSK still needed to make 103 runs from 38 balls.

The final hope rested on CSK captain Mahendra Singh Dhoni who hadn’t scored a run in over a year. Faf du Plessis would finally start showing the intent that was lacking so far but Dhoni continued the slow plodding that had become characteristic of CSK’s innings so far.

With the required run rate crossing 17 runs an over, both batsmen needed to fire on all cylinders. Plessis did his best by hitting 7 sixes and a four during this period before losing his wicket in the penultimate over.

That left Dhoni in the company of Ravindra Jadeja to try and score 38 runs of the last six balls. Dhoni would finally show some aggressiveness and hit three consecutive sixes in the final over but it would be a matter of too little too late.

However, it would ensure that they would only lose by 17 runs.

The final scores might suggest that this was a relatively close affair but it was anything but that.

CSK had already lost the match by the 15th over. On a night when 34 sixes were scored to equal the all-time IPL record, it was the bowlers who made the difference. The more experienced bowling unit of CSK kept erring on their line and length. Piyush Chawla was particularly guilty of keeping it too full.

While Rajasthan Royals will be happy with this performance, they do have a few things to sort out.

The middle order needs to perform as they could have very much lost this match had it not been for Archer’s 30 runs off of the final over. CSK on the other hand have a lot of things they need to get right.

CSK have work to do

The most important would be Dhoni’s batting position. These days, he needs time to settle in and that is something he will never get if he comes out to bat at number 7.

CSK also needs to pace its inning and something has to be done about their misfiring middle order. They will also have to do something about their bowlers as this was hardly a performance befitting a top IPL team.

When it was all said and done, CSK did manage to limit the damage as they were at one time looking at a massive defeat that could end up being decisive later in the tournament when the net run rate could come into play.

Rajasthan Royals, meanwhile missed an opportunity on that front. At the end of the day, both teams were guilty of errors but CSK made the more serious ones and lost the match as a result.

On the bright side, Dhoni finally got the match practice he needed and they can now look to bounce back while Rajasthan Royals would be hoping to sustain this performance while removing the chinks in their armor.