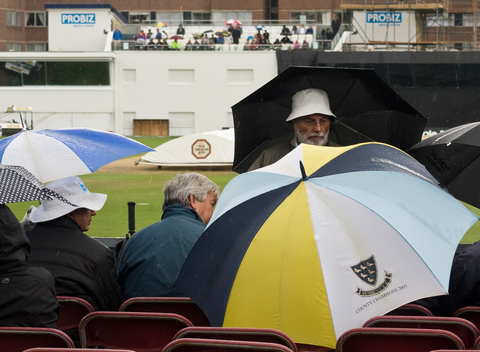 The entire fourth day’s play at Old Trafford was washed out on Monday and English players could do nothing but bite their finger nails in frustration as the rain threatened to sweep away their chances of a series win against the Windies.

There were hopes that play will resume but umpires finally decide at 3 pm that enough is enough and called off the day.

3 pm is when the English have their high tea! We are sure that the English cricketers didn’t enjoy their tea sessions this time around!

After all, they have done remarkably well to stage a comeback from the first test which they lost by 113 runs.

However, all is not lost.

They still have a day left and surely if the rain doesn’t intervene, they will fancy their chances!

West Indies have a challenge

To survive, they need a long partnership between batsmen who will forsake risk and stonewall the bowlers, while still being positive.

Nobody in the West Indies line-up quite matches up to this description.

England will be all fired up too.

Apart from the series victory, another cricketer is on the cusp of creating history.

Stuart Broad is at 499 test wickets.

After his ejection from the first test squad, Broad has been in searing form.

One more wicket will make only the 7th bowler in history to take 500 test wickets.

In the first innings, West Indies made 197 while England made 369, aided by an attacking 62 by surprise, surprise, Broad!

In the second innings, England declared at 226-2. Rory Burns underlined his talent with a classy 90 while Joe Root and Dom Sibley struck half centuries.

When WI came out to bat in the second innings, Broad was on fire again and dismissed John Campbell and Kemar Roach.

Till now, the highest 4th innings score in Old Trafford is England’s 294-4 against New Zealand in 2008.

So history is against the Windies. But if the weather gods are with them, they might still survive!