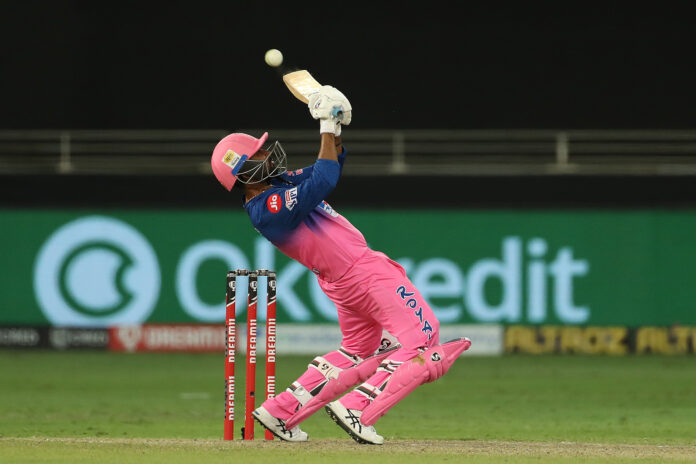 Every year, the IPL brings to fore one player that no one fancied at the start of the tournament.

In 2020, that player has been Rajasthan Royals’ Rahul Tewatia.

Owing to the way the IPL is structured, every team consists of a few big guns who are complemented by a few utility players.

These utility players aren’t necessarily seen as match-winners and are only expected to chip in with a few overs and some useful runs.

Rahul Tewatia, very much, belonged to that group.

That is why he has been carted around by the different teams in the IPL. However, bucking all the expected trends, Tewatia is proving to be one of the success stories of IPL 2020.

Tewatia is 27 years old and he was born in the north Indian state of Haryana.

He got his big break when he made it into the Haryana state team in 2013. The next year, he would get his chance at IPL cricket with Rajasthan Royals.

He had a largely underwhelming debut season in the IPL. He would only feature in 3 matches and score 16 runs and take two wickets.

2015 would be even more listless as he would get to play just a single match before being dropped from the IPL altogether in 2016.

2017 would see him make a return to IPL with Kings XI Punjab but his fortunes wouldn’t improve. He would again only get to play 3 matches, this time scoring a total of 19 runs and taking 3 wickets.

He would then be picked up by Delhi Capitals in 2018 and this would be the first time he would be featured as somewhat of a regular squad member. His performance would also see a slight improvement.

In 2019, he would be traded to Rajasthan Royals in what was seen as a homecoming for Tewatia as it was with this team that he had made his IPL debut.

He again flew under the radar in 2019 as well. 2020 would, however, be his year as he would grab the limelight for all the right reasons.

Tewatia has been pigeonholed into a supporting role so far and there a few good reasons for that. He is an all-rounder but isn’t seen as having a really strong suit.

His leg-break bowling isn’t on the same league as a regular leg-spinner. He has a propensity to bowl loose deliveries. His batting isn’t technically sound either with the only advantage being his left-handedness that can be an advantage against the opposition’s spin bowler.

Despite all of this, he has been able to create his own niche and has been instrumental in all of Rajasthan Royals’ victories this year. This is mostly down to the format of the game.

While T20 cricket does reward a technically sound player, it also has a place for the player that never gives up and the 2020 Tewatia falls squarely into that category.

While players like Sanju Samson, Steve Smith, and Ben Stokes were seen as the focal point for the team, it has been Tewatia and his pluckiness that has been the difference-maker for the team so far.

The one word that perfectly encapsulates his career is ‘struggle’ and it has been no different this year. A great case in point was the 31-ball 53 he scored against Kings XI Punjab.

While chasing 223 runs, he got off to a really slow start that saw him score just 14 off 21 balls. He seemed well on course to undo all the hard work that Sanju Samson was putting in from the other end.

It got to a point where the asking rate had climbed up to 17 and the match seemed like a lost cause. It was at this moment that Tewatia chose to shine.

There is a popular saying that when the going gets tough, the tough get going and that is exactly what Tewatia exemplifies. He is far from the perfect cricketer.

He has many chinks in his armour that the opposition can exploit but he also never gives up and in Rajasthan Royals, he has a team that has the patience and foresight to nurture his pluckiness.

He is slowly becoming the player his team can turn to when they want to get out of an impossible situation that even their proven match-winners have no answer to.

For all these reasons, Tewatia can be considered to be one of the success stories of the behemoth that is the IPL.

Pravin Tambe – the only Indian in the CPL