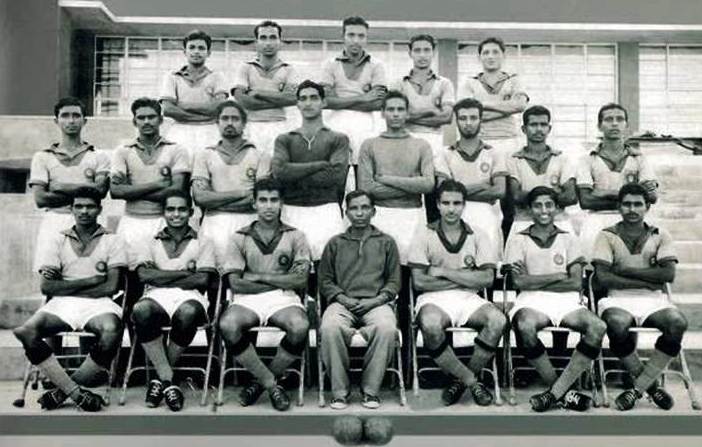 You read that right.

Because, once upon a time, India produced footballers who dazzled the entire world.

Hard to believe but true! Like Chuni Goswami, whose picture you see above.

Chuni was one of India’s greatest ever football players. But more about him later.

Chuni Goswami passed away recently and this article is our tribute to him and the other wonderful talents who graced Indian football.

Even though cricket takes centerstage while talking about sports in India, we have a rich football history.

So we have attempted to put together a team featuring the best footballers India has ever seen.

The squad is in a 3-4-3 formation. So we have picked players, who would’ve suited this system best.

So, without further ado, let’s go the squad selection.

Peter Thangaraj is the automatic choice here. Nobody would question the fact that the 6 feet 4 inch tall custodian is the best goalkeeper ever born in India. Thangaraj started out his career as a forward. But soon he found out his true passion lies underneath the post. The East Bengal legend was named the best goalkeeper of Asia in 1958 and 1967.

During his playing days, Mohamed Yousuf Khan was deployed at multiple roles. But owing to his versatility, he discovered his true identity playing as a centre back. Khan was an integral part of the Hyderabad City police team that was dominant in the ‘50s and ‘60s. The Arjuna Award winner represented India in the 1965 Asian All Stars XI.

Arun Ghosh was India’s best defender in their gold medal Asian Games campaign in 1962. Ghosh wasn’t the most physical player on the pitch. But his technical prowess made him an indispensable part of teams throughout his illustrious career.

“Invincible”-that’s the word we would use to describe Jarnail Singh. His never-say-die attitude was an invaluable asset to the Indian team in the 60s. He scored a marvellous header in the final of the 1962 Asian Games, despite having six stitches on his head. He was a great defender, but also had the necessary attributes to play in advanced positions when required.

Sailendra Nath Manna, better known as Sailen Manna, will wear the captain’s armband. Manna captained the India team, which won the gold medal in the 1951 Asian Games. The defender was famous for his accurately timed tackles, and rarely gave away fouls to the opposition. He was also great at taking set-pieces.

Sudhir Karmakar had the privilege to play for both Mohun Bagan and East Bengal, the fiercest rivals in Indian football. He was dubbed as Asia’s finest defender after his excellent display at the 1970 Asiad where India bagged a bronze medal. Karmakar was a formidable marker and a great reader of the game.

Mariappa Kempiah was also a member of the Indian golden generation back in the ‘50s. The Bangalore boy never shied away from a tackle. He exploited his agility and physique magnificently to become a resolute defender. His strength lay in closing down attackers and winning back the ball.

Kempiah was one of India’s best players in their 1956 Olympics campaign, where they finished fourth. He also excelled as a defensive midfielder, and in our team, he would provide the defensive cover in the midfield.

Chuni Goswami famously turned down an offer from Tottenham Hotspur to continue playing domestic football in India. Goswami was a phenomenal striker, who lead his club to Asian Games glory in 1962. Unbelievably, he almost replicated that success in the 1964 Asia Cup.

However, in our team, he will play in a deeper role. This decision stems from his ability to effortlessly dribble past players and his passing fluency. Therefore, Goswami will be the creative core behind the front three.

Having hung up his boots during the British India era, Mohammed Salim never played for India. But, the Kolkata man was definitely one of the most gifted footballers born in the country. In fact, Salim had the opportunity to play for Scottish giants Celtic. And in fact, was the first-ever player from the Indian subcontinent to play in Europe.

Read more about this legend here.

Pradip Kumar Banerjee was a winger with a flair for goals. The forward scored the equaliser in India’s memorable 1-1 draw against European powerhouse France in the Rome Olympics in 1960.

The mercurial attacker spent all of his senior career at Eastern Railway, ignoring big money calls from other clubs. He was recognised as ‘Indian footballer of the 20th century’ by FIFA. He was also honoured with ‘FIFA centennial order of merit’ in 2004.

Tunku Abdul Rahman, Malaysia’s founder, was a huge fan of PK. Once, during the Merdeka Cup, he was so besotted by PK’s skills that he offered him Malaysian citizenship during half-time!

Bhaichung Bhutia might consider himself unlucky for not being able to play in the golden age of Indian football.

After the ’80s, you won’t find many Indian footballers who had the quality to walk into the brilliant Indian teams of the 1950s and 1970s. But Bhutia is a glittering exception.

Bhutia became only the second Indian player to play in Europe after signing a professional contract with English second-tier club FC Bury. The striker scored 40 goals for India in 84 international appearances.

Why no place for Sunil Sunil Chhetri

It was a close call between Bhutia and Sunil Chhetri.

Finally, one factor tipped the scales in favour of Bhutia. He played and excelled in a much tougher league, compared to Sunil Chhetri.

All That’s Happening In The World Of Football: Van Dijk’s Unbeaten Run Ends, Messi Back To His Absolute Best