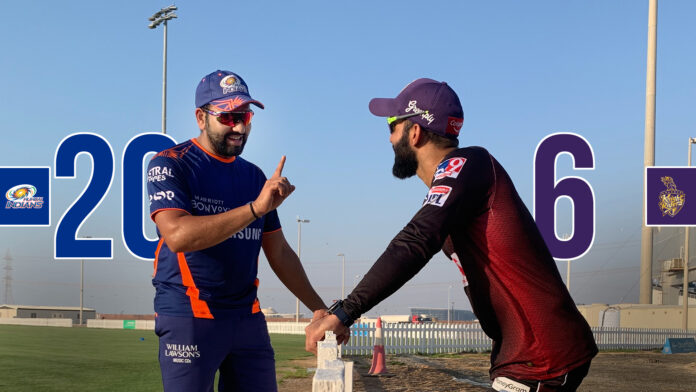 UAE has been an unlucky venue for the Mumbai Indians.

But yesterday, the tide turned.

It was supposed to be a keen contest but turned out to be one-sided as Mumbai never let off the pressure.

Though it was a team effort, skipper Rohit Sharma and pacer Jasprit Bumrah were pivotal in winning the match for the defending champions.

Overall, MI looked in ominous form as they shrugged off the opening day defeat to CSK.

Rohit bagged the Man of the Match for his master class that came when the team needed it most.

KKR seems to be jinxed against MI. The head to head tally between the two teams now reads 20-6 in Mumbai’s favor.

This is surprising as KKR lost their opening game in an IPL season for the first time since 2013.

The bad spell against MI started when KKR openers, Shubman Gill and Sunil Narine failed to get going and fell in quick succession.

Karthik added a 46-run stand with Nitish Rana (24) for the third wicket, but others fell like ninepins.

Surely, one expected more from the KKR batting line-up.

The wrecker-in-chief was Jasprit Bumrah who nabbed both Russell and Morgan in the 16th over, and with it, submerged KKR’s hopes.

Knights fail to get going

KKR had to get 196 but it’s fair to say that they didn’t even make a fight of it.

The pacers peppered him with the short ball and he hardly got anything in his half. While he has smashed short bowling at the top of the order in the past, it was rather more difficult to do against the high quality attack of Bumrah, Boult and Pattinson.

Predictably, a slog across the line to a short ball resulted in Narine’s dismissal.

Dinesh Karthik scored 30 but even he will agree that it wasn’t his best innings.

He looked a tad out of touch and his lack of fluency rubbed on Eoin Morgan (16) and Andre Russell (11), whose collective failure hurt KKR.

Pat Cummins struck some lusty blows lower down the order as he scored 33 off 12 balls to cover up for his expensive spell early on.

Rohit Sharma blasted 80 in 54 balls and kept his love affair with KKR going. He hit as many as six sixes in his knock and became the second Indian batsman to hit 200 sixes in the IPL after MS Dhoni.

It was a tough game for the KKR bowlers, who fed off bouncers to Rohit, who was hitting them for fun.

It was a bad day for the pacers especially since they travelled all over the Zayed stadium. Pat Cummins went for 49 from his 3, while Sandeep Warrier went for 34 off his 3.

The biggest disappointment was Kuldeep Yadav, who went for almost 20 runs per over in his spell. There is talk that Yadav often falters under pressure and performances like these only add grist to this story.

Cummins did bang it short in on a hard length, but Sharma, Tiwary and Hardik Pandya managed to bombard the square boundary with sixes and fours.

All said and done, KKR needs to get their act together against SRH on September 26.

Mumbai’s next challenge will be against RCB in Dubai on September 28.

India’s tour of England – A summer of opportunities and possibilities