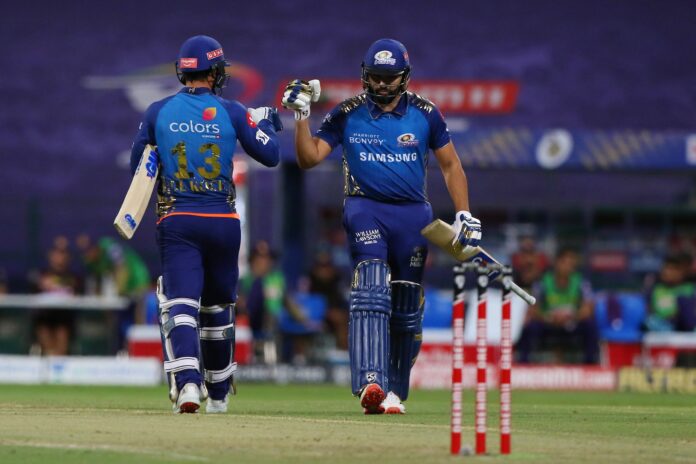 This was the most authoritative MI win of IPL 2020.

It was built on the back of what is easily the most complete bowling attack of the tournament.

Bumrah, Boult, Pattinson, Chahar, the Pandya brothers and Pollard – some of them are stars and some aren’t. But they have moulded themselves into a relentless bowling unit, under the expert tutelage of Zaheer Khan who deserves a lot of credit.

It’s an attack that has everything. The raw pace of Bumrah, the disconcerting accuracy and bounce of Pattinson, the hustling quality of the Pandya brothers and the experience of Pollard who always finds a way to contribute.

Yesterday, Nathan Coulter-Nile came in for Pattinson and went for 51 runs in 4 overs but the other bowlers ensured it didn’t matter!

The first to go was Rahul Tripathi who scored 7 off 9 balls when Suryakumar Yadav at backward point pulled off an excellent diving catch.

A fit-again Nathan Coulter-Nile, who had replaced fellow Australian James Pattinson, then had Nitish Rana gloving a lifter behind for 5 off 6 balls.

Nitish Rana once again fell cheaply proving that he is one of the weak links of the already brittle KKR line-up.

Oddly, Shubman Gill looked out of sorts and gulped down ten dots out of the 23 deliveries he faced and holed out for 21, trying to clear long-on.

Karthik’s nightmare continued when in the same over, Karthik dragged a sweep back onto his stumps for 4 off 8 balls.

When Bumrah bounced out Russell for 12, the Knight Riders were five down in the 11th over.

Russell and Karthik were supposed to be the key batsmen for KKR and their repeated failures are hurting KKR big time.

However, Pat Cummins hit his first T20 half-century and even outscored the Knight Riders’ new captain Eoin Morgan in an unbroken 87-run partnership off 56 balls.

The late charge gave the Knight Riders something to bowl at, but the target looked piddly against the imposing MI batting line-up.

Varun Chakravarthy missed a tough chance to catch De Kock when he top-edged the ball off spinner Chris Green.

KKR was made to pay for this as De Kock raced to a 25-ball fifty – his third in his last four innings that effectively killed the contest.

Offspinner Chris Green, who was picked in place of Tom Banton, took the new ball and found swing with his arm balls, but his first delivery was too short and wide, with Sharma nonchalantly putting it away for four.

It was a portent of what was to follow in the chase.

Sharma then went after seamer Prasidh Krishna, taking him for back-to-back fours in the third over.

Though Sharma played his slow innings with 35 off 36 balls and Suryakumar Yadav went for 10, Hardik Pandya helped himself to three fours and a six and ended the contest with a quick fire 21 not out.

This was MI’s fifth successive victory but what was awkward was the ease of victory.

MI won with 19 balls to spare. Owner SRK won’t be happy with KKR’s performance, for sure.