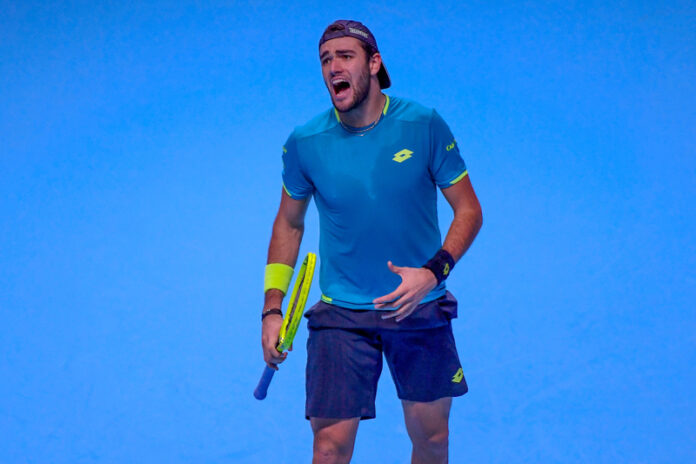 Alexander Zverev stopped Matteo Berrettini’s charge as he came from behind to win his 4th Masters 1000 Title at the Madrid Open.

The 1st set went with serve till 3-3 when Berrettini broke the German and took a 4-3 lead.

Zverev broke straight back in the next game and the 1st set eventually went to a tie-break, which was no less than a roller-coaster ride.

Berrettini got out of the blocks quick and took a 5-0 lead, but Zverev hit back to get to 4-5.

Berrettini squandered two set points, but at 8-8, Zverev double-faulted, and the Italian finally converted his 4th set point to clinch the 1st set.

Zverev hung in there in the 2nd set and waited for his chance which duly arrived in the 9th game with the scores level at four-all.

Zverev broke the big-serving Italian and then served out the set to take it to a deciding set.

The Italian had the 1st chance to break in the 4th game, but Zverev stood firm, and that proved to be the pivotal point in deciding the final.

Zverev broke in the next game. Berrettini was out of gas at this point, and Zverev broke him to win the deciding set 6-3 and win his 2ndMutua Madrid Open title.

It was a match worthy of a final with both men showing they deserved to be in the final playing some scintillating tennis.

Berrettini will be proud of his work in Madrid this week, but it was Zverev who prevailed, bagging the title that he also won back in 2018.

As for Berrettini, he reached his 1st Masters 1000 Final and would look to build on it going to Rome.

Zverev had overwhelmed Nadal, Thiem, and finally Berrettini to win the title.

Aryna Sabalenka avenged her loss in the Stuttgart Open final against World No. 1 Ash Barty on Sunday by winning the women’s final.

Sabalenka was in the mood to dominate from the start, winning the 1st set 6-0.

The world No.1 fought back after weathering the Sabalenka storm and forced a decider by winning the 2nd set 6-3.

Sabalenka wasn’t to be denied, though, as she prevailed in the deciding set 6-4 to clinch the biggest title of her career.

Sabalenka’s win has propelled her to a career-high No.4 ranking in the world.

Of course, the winners, Zverev and Sabalenka, had a great tournament.

Still, it was a tournament to remember for Berrittini and Casper Ruud as well.

Dominic Thiem had a good run in his first tournament back after taking time away.

As for the women, the young Spaniard Paula Badosa had a great tournament on home soil.

Veteran player Russian Anastasia Pavlyuchenkova also did well to reach the semi-final showing she still has it in her to make a deep run in such tournaments.