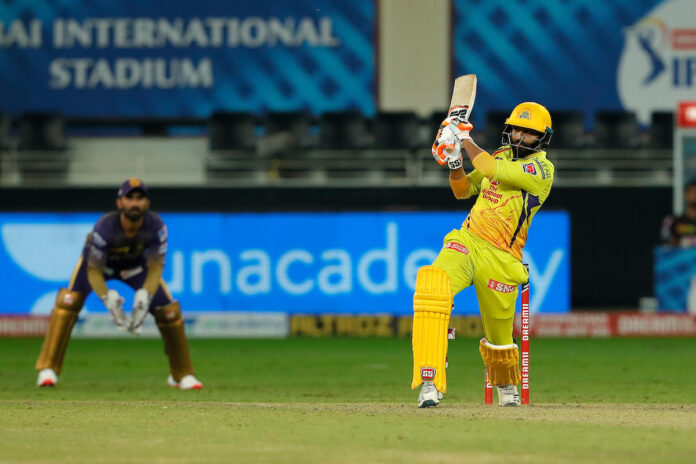 According to Dhoni, Rituraj Gaikwad – who was bought for INR 20 lakh at the auctions before IPL 2019 is one of the “most exciting talents” in Indian cricket.

Gaikwad proved his captain right with a brilliant 72 that earned him a Man of the Match award.

“Rituraj has shown the talent that we had seen in the net sessions, but unfortunately he came in, got positive with Covid-19 and you usually get well in 12 days but it took him 20 days and we didn’t have much time to look at him,” Dhoni said in an interview after the match. “At the end of the day, he will really remember this season because he was able to showcase the talent he has.”

It is a turnaround from Dhoni who was criticised a few days ago for stating that the CSK youngsters lacked a spark!

Well, all we can say is the spark has been lit and infused new energy into the performances of the ageing CSK team.

The Super Kings made a steady start, with Watson not able find runs between his boundary shots.

Gaikwad was much more assured, particularly against Ferguson, whose pace and accuracy had troubled everyone he had come up against till now.

In Ferguson’s first over, Gaikwad pulled and straight drove the bowler for boundaries, and was quickly outscoring Watson.

When Watson fell, trying to go big but caught at long-on, Rayudu joined Gaikwad for the partnership that helped CSK take command of the match.

An interesting facet about Gaikwad’s batting is that he plays the ball very late. This gives him some extra milli-seconds to choose his shot. While it’s premature to talk about Gaikwad’s future, this is something that will please most batting coaches as it’s a quality all great batsmen are born with.

Gaikwad was all timing and elegance as the Super Kings began solidly. His shot-making, particularly off Lockie Ferguson, was the best on display on the night

Rayudu chose to punish Rana – the Knight Riders’ sixth bowler on the day – carting him for three fours in what would be his only over, and then punished Nagarkoti too.

In between, Gaikwad was in command against Ferguson, and had reached his second successive fifty. Rayudu was out to Pat Cummins to break a 68-run stand that had come in just 6.1 overs and left the Super Kings needing 55 off 38 to win.

There was still a lot of work to do, but Jadeja stood up and delivered when it mattered.

Interestingly, his batting average of 46.40 and strike rate of 171.85 is better than Ambati Rayudu, Faf du Plessis, Sam Curran and MS Dhoni.

Earlier, the Knight Riders had put up a competitive 172 for 5.

Shubman Gill perished for a rapid-fire 26 but Nitish Rana came into his own with an attacking 87 off 61 balls, hitting 10 fours and 4 sixes. Dinesh Karthik contributed a quick 21, aided by some cheeky hitting to help KKR post a competitive total.

Rana was subdued in the beginning but blossomed when the spinners came on. He hit two fours and a six in the sixth over off Santner, to give KRR a much needed momentum.

While CSK is already out of the tournament, this loss has put a wet blanket on KKR’s hopes of qualifying for the play-offs.