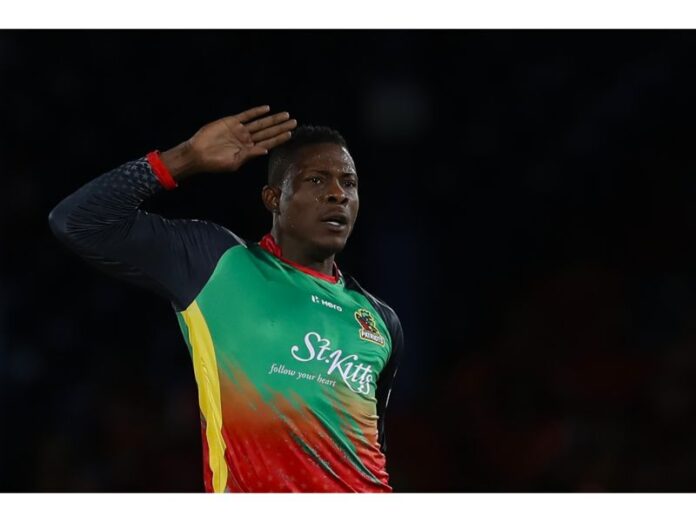 Nothing seems to be working for St. Kitts. Set a target of 173 by St. Lucia Zouks, they made a hash of it and fell 10 runs short.

Well, the answer is, everything!

To start with, they are relaxing at the wrong moments.

You can attribute this to a loss of concentration or sheer over-confidence!

But Sohail Tanvir tried to get cute with Nabi who promptly smashed him for 2 big sixes! Cottrell’s final over also yielded 16 runs and these 2 overs gave the Zouks’ innings a big bump in the end.

Both Cottrell and Tanvir are experienced cricketers and it was disappointing to see the lack of application during the final overs!

The ten-run loss is the Patriots’ third in the tournament, and they better buck up!

Fletcher top- scored with a well-made 46.

Nabi struck some lusty blows including 1 six and 3 fours to ensure that the Zouks ended with a fighting 172 for 6.

It’s fair to say that Nabi’s innings tilted the momentum in favour of the Zouks and ensured that they finished on a mental high. Thanks to some generous help by Cottrell and Tanvir.

Rayad Emrit was the pick of the bowlers for St. Kitts, his four overs going for just 14 runs. Sheldon Cottrell, the spearhead failed to make an impact going to 49 off his 4 overs.

St Kitts and Nevis Patriots kept losing wickets and as a result, could never really get into the match.

Nabi, followed up his exploits with the bat, made the first breakthrough for the Zouks, with the wicket of Chris Lynn when the scoreboard read just 28.

And then, Roston Chase got into the act.

Chase is an all-rounder who is proving his utility to the Zouks in every game.

He started with a fifty in his first game, followed by two wickets in the rain-hit win against the Barbados Tridents on Thursday.

Against St. Kitts, he failed with the bat but proved to be a match-winner with the ball, snaring 3 key wickets – Even Lewis, Joshua Da Silva and Ben Dunk.

What’s more, he gave away only 12 runs in his four overs, and did not concede a boundary.

When he started, the Patriots were scoring at ten an over. But he destroyed the middle order and put brakes on the scoring rate that dipped to 7.45 by the time he finished.

Ramdin is a classy bat and yesterday he showed what he is capable of.

He scored 46 in just 35 balls, with 2 fours and 2 sixes with a strike rate of 131 and looked likely to take the Patriots home.

Sadly, he didn’t receive the support of his team mates who kept falling like ninepins and ensured that the chase never picked up momentum. A 25-run stand with Kieran Powell was the biggest partnership he was involved in.

Ultimately, he fell to the medium pace of Scott Kuggeleijn who chipped in with 3 other wickets – Kieran Powell, Emrit and Sohail Tanvir to ensure there would be no late fight back.

Kuggeleijn’s burst of three wickets in four balls, helped him finish with 4 wickets for 33 runs.