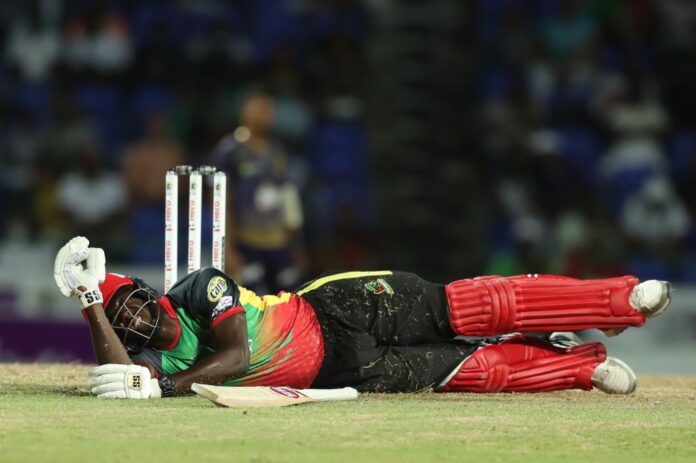 Two factors helped the Tallawahs – Glenn Phillips’ unbeaten 79 and an accurate bowling performance, with lots of intensity thrown in.

The win created some ripples in the table and helped Jamaica move to third place.

Though St. Kitts fell short by 37 runs, the result was not a certainty, especially after Jamaica ended at 147.

Rovman Powell, the Jamaica captain would have liked a few runs more, for sure.

A slow start for Phillips

Tallawahs looked like they were scared of losing and were over-cautious, failing to punish even the loose balls.

Even Phillips was in stealth mode till the 16th over.

His first 23 balls yielded just 14 runs. His first boundary was only in the 11th over!

In what can be considered an act of T 20 blasphemy, he also conceded a maiden to leggier Imran Tahir in the 14th over!

But then, the floodgates suddenly opened and till he suddenly exploded in spectacular fashion, smashing his way to 79.

He whacked Cottrell for three sixes in as many balls, all three of them down the ground, which shows that he hit the ball cleanly.

This was the first time he has ended not out in his CPL career!

Batting consistency has been the bugbear for St. Kitts al through out and this was no exception.

In what is proving to be a familiar sight, Chris Lynn’s problems continued as he was castled by Fidel Edwards in the very first over.

Denesh Ramdin and Kieran Powell steadied the ship and took the score to 42.

But it never looked like it will last as Permaul got into the act and got Ramdin for 13.

This signalled the start of an unexpected collapse.

Dunk followed Ramdin to the pavilion bowled by a Brathwaite beauty.

Kelly and Evin Lewis were the only batsmen who showed some semblance of a fight, scoring 16 and 21 respectively.

But the unrelenting bowling firepower of the Tallawahs won the day.

This was a match that was hit by injury. For the Tridents, Andre Russell missed a second game in a row due to his knee injury and Phillips suffered a bad bout of cramps.

Even Dunk went off the field in the second over for the Patriots with a thumb injury and Evin Lewis looked like he had a groin strain. Hope they recover soon.