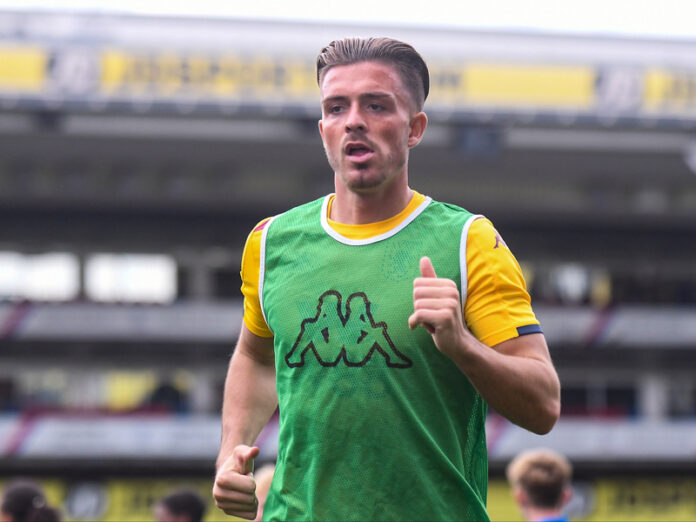 The entire footballing world is waking up to what the Aston Villa faithfuls have always known.

That Jack Grealish is a freak.

So staggering is his talent that his footballing rise has a ring of inevitability about it.

A playmaker capable of the spectacular, he made his senior debut against Manchester City in May 2014.

During the 2018/19 season, Grealish captained the team as they managed a club record ten consecutive wins before leading Villa to promotion via the Play-Offs.

The midfielder was part of the England Under-21 squad that won the Toulon Tournament in 2016. Later, Grealish earned his first senior cap in September 2020 as England drew 0-0 with Denmark in the UEFA Nations League.

The six-year-old boy joined Aston Villa’s academy back in 2002.

He was born in Birmingham as the first of three children to his parents, Kevin and Karen who are devout Catholics.

He was raised in Solihull, a large town in North East England and home to the manufacturing plant of the famous automotive brand, Land Rover.

Jack’s favourite player was the legendary Paul Merson who found success as an attacking midfielder and play maker for Aston Villa.

Jack’s most cherished childhood memory was waiting outside the Villa training grounds to take a snap with Paul Merson who made 101 Premier League appearances for Villa between 1998 and 2002.

His quality was obvious

From a very young age, Grealish could carry the ball all alone by taking on people with ease which made him stand out from the other kids.

His rapid development saw him make a way into Aston Villa’s first-team squad by the age of 16 although he was an unused substitute in that match.

It was clear that Jack was cut from a different cloth.

Although he was subject to most fouls on the field as he is today, he never agreed to wear shin pads during the game ignoring the advice from his coaches.

Later, Grealish started wearing child-sized shin pads whilst playing, in order to maintain his ability to control the ball effectively.

He also wears his football socks rolled down due to superstition, which has led to referees warning him to pull them up.

He was not the quickest on the pitch but he could read the game faster than the others around him which spoke volumes about his footballing intelligence.

He has a pass completion rate of 84.6% which is outstanding for a player who is the only creative outlet in his side and has to make most of the risky passes all by himself.

This is again a higher number than top midfielders like Kevin De Bruyne and Bruno Fernandes, highlighting how good he’s on the ball.

Another commendable trait of is his ball retention in tight spaces which allows him to carry the ball from the midfield to the final third often.

His dribble completion rate stands at 2.1 per game whilst suffering fouls at an enormous rate of 5 per game.

He tries to take on every single player on his way, something that he was known for as a kid. He is an imposing figure on the field that defenders can have a tough time stopping him.

Also, he has the much sought after ability to play on the half-turn which helps him crack even the deepest of defensive structures because of the quickness at which he thinks and plays.

However there is consensus that he can get better.

When the team doesn’t have the ball, Grealish needs to work harder tracking back and pressing and that is something that he is adding to his game.

England manager, Gareth Southgate challenged him to improve his end product and to work harder when his side don’t have the ball.

When it comes to end product, Southgate wants Grealish to score at a comparable rate to his first choice from three of Harry Kane, Raheem Sterling and Marcus Rashford.

If Grealish can improve in these aspects, there is no stopping him.

After all, he is also a born leader and a vocal figure in his team.

At the age of 25, he is already the leader of an Aston Villa team that is clearly punching above its weight.

And Grealish has a big role to play in that.