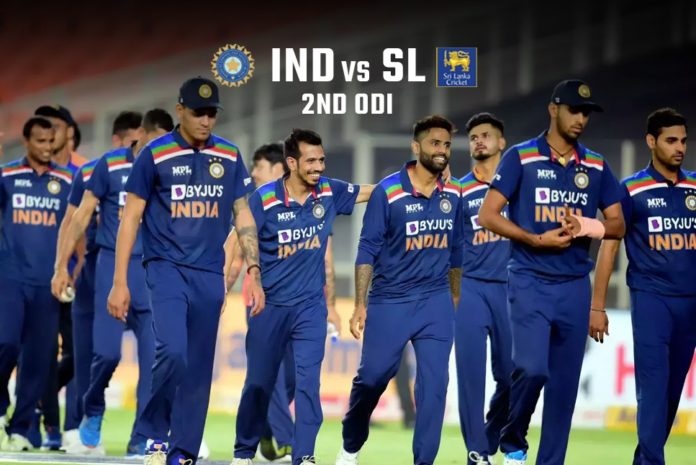 It is said that couples are made in heaven. Well, we’d beg to differ. From what and how the story unfolded in the first ODI, it can clearly be said that – Some Debuts are like fairy tales made in heaven. The story of the first ODI between India and Sri Lanka had its significance in ways deeper than one can imagine.

On both sides of the field, there were two young teams, who were being led by two first time ODI captains. Yes, you read that right. This was a rare instance when both teams on each side were being led by debutant ODI Captains. When was the last time this happened?

And that’s not all, from India, Surya Kumar Yadav and Ishan Kishan – the young prodigies were making their much awaited debuts for team India. On the flip side, facing them was a young Sri Lankan team consisting of Bhanuska Rajapaksa who was making his debut too, there was wicket-keeper Minod Bhanuka playing his 2nd, Charith Asalanka playing his 3rd, Chamika Karunaratne playing his 5th and all these with two debutant captains on the either side. Interesting yet rare right!?

Sri Lanka started off well but after the 10 over mark, they started losing wickets in a flurry and had it not been for Karunatne’s 43 of 35 balls, the target of 262 would have been a little more funnier. With not a very decent score but with something to bowl at, the Sri Lankans wrapped up their innings for 262-9 in 50 overs.

During the halftime, the Lankan team might have found a little momentum going back to the dressing room with at least something to bowl at but Prithvi Shaw and Company had some other plans. He bludgeoned the Sri Lankan bowling attack and shattered any of their dreams of making a comeback to this game with 9 fours and quickly scoring 43 runs off just 24 balls (Mind you, this was not a T20 game).

India did not just chase the target of 263, they bullied and buried it. They finished off the chase in just 36.4 overs with 80 balls and 7 wickets to spare. After Shaw’s blitz, Captain Shikhar Dhawan and Debutant Ishan Kishan just stole the show and it was brilliant to watch them while they were in the flow with both registering their half centuries making Shikhar Dhawan a part of the elite list of Indian players to have scored an impressive half century on their captaincy debut.

This list is not just Elite, it’s beyond Elite. And now talking about big names and big games, Mr. Ishan Kishan too managed to get his game registered in the record books for being the only second Indian player after Robin Uthappa to have scored a half century on both ODI and T20 debuts.

The Spin twins – ‘KULCHA’ too had an amazing game themselves bagging two wickets a piece and the Pandya brothers also taking a wicket each. Surya Kumar Yadav made an impressive debut too scoring 31 off just 20 balls showing yet again why he belongs at the top level.

Though outplayed, the young Sri Lankan Team too showed great grit and talent and finally started making it feel like finally better days are back again for a nation like Sri Lanka who take a lot of pride in their cricket.

All in all – this makes the second ODI a rollicking encounter with plenty of talent on show.

Who do you think will make his name known?

India vs Sri Lanka – Few Other Records Broken in this Match.

Second ODI, Team News, Combinations and What to expect?

The Indian camp must be pretty settled after the first game. And when you have Rahul Dravid as your coach, there’s not much to be worried about anyway. The Indian team might be looking to hand in a debut to Sanju Samson but with just one game being played and the series not yet in the pocket, he might have to just wait a little. Shaw felt the sting of Chameera’s bouncer, he felt the sting in his head, but continued his innings so he should be fit enough to play.

After the hammering in the first game, the Lankan Camp will be looking to make changes but could also stick to their last XI giving the another go. One positive thing all these Lankan batsmen could take from the game would be the fact that they all got good starts and with a little bit of application and more importantly patience, they could pile up the runs on the board or even hunt totals down. So all in all we have a cracker of a contest before us.

The India vs Sri Lanka series will be streaming live on the SONY LIV app. You can watch the complete ODI and T20 live stream on your TV too, on SONY SIX and SONY TEN3 channels (both HD and SD) and also on Doordarshan.