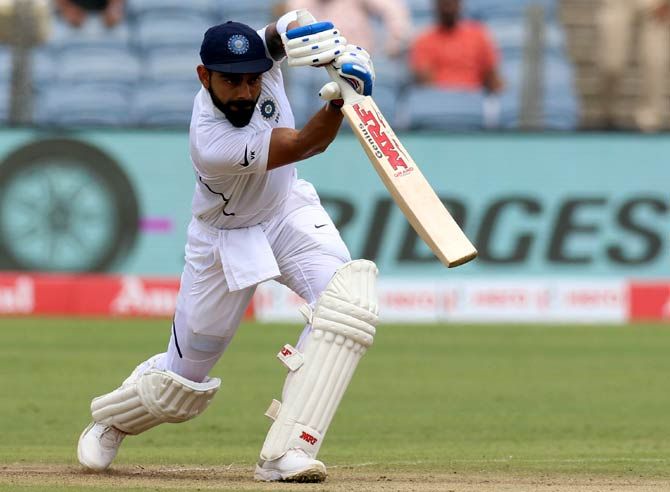 After the T20 series panned out, there was not much expected out of the visitors in the test series. However, considering that it is the longer format of the game there was a feeling that there would be ups and downs and that would make the contest a little more interesting. Thanks to a Ravindra Jadeja masterclass that included a 175* and also 9 wickets spread across two back to back Sri Lankan innings, that game was not much of a contest either and India won the game by just batting once and winning with a huge margin of an innings and 222 runs.

The second test seems to be another one-sided affair too!

The second test has two differentiating factors – first that it is a day-night test and secondly and more importantly, this test is being played with a pink ball which means that swing, seam and spinners will all come into play making the contest between bat and ball a little more exciting.

Here are the lineups for both the teams

India’s ship was rocked early by the Lankans. Mayank Agarwal was run out for 4 while Rohit was also dismissed when he was only on 15 and India were 29-2 inside the first ten overs. Hanuma Vihari and Virat Kohli couldn’t do much themselves and were dismissed for 31 and 23 respectively and the score was just 86-4. However, Shreyas Iyer yet again had other plans. From Pant to Bumrah, Shreyas Iyer lasted at one end while wickets kept tumbling at the other. Thanks to his fine knock of 92 runs in just 98 balls in what seemed like a very difficult surface to bat on with the pink ball testing the batsman, India finished with a first innings score of 252-10.

The score seemed very low but it was a decent score when you take the conditions into account. And if you take Sri Lanka’s start to their first innings, it looked like a mountain. At the end of day 1, Sri Lanka were 85-6 with a mountain to climb.

The second day was even worse for Sri Lanka. The Indian bowlers were in some serious mood and they wrapped up the Sri Lankan innings for just 109 runs. Bumrah was the pick of the bowlers as he picked up a fifer for just 24 runs. Ashwin and Shami also bagged two wickets each and Axar picked up one wicket. India had a huge first-innings lead. They came out to bat in the second innings and got a very healthy total of 252 runs. Shreyas Iyer was again the pick of the batsmen and he was India’s highest scorer with 67 runs. Rishab Pant too was equally good with the bat. He scored a blistering 50 in just 28 balls (yes in a test match).

With this knock, Rishab Pant broke a 40-year record held by Kapil Dev. He broke the record of the fastest 50 in tests by an Indian. Kapil Dev had scored his 50 in just 30 balls in 1982 against Pakistan. Rishab completed his 50 in just 28 balls.

At the end of day 2, Sri Lanka is staring at the barrel of another huge defeat. They are at 28-1 and have 9 wickets in the bag to chase a mammoth total of 419 runs on a pitch that is doing just everything. These are very difficult conditions and it will take some chasing from the Lankan side.

Do you think this test will even see the light of day 4? Do let us know in the comments below!