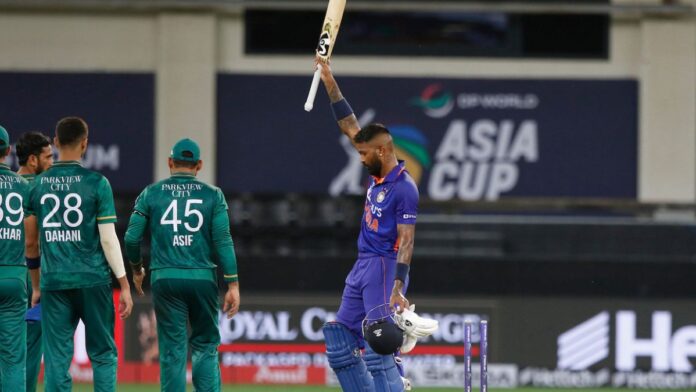 Everytime India and Pakistan meet on a cricket field, there is excitement like anything. Especially after considering that India were defeated by Pakistan by 10 wickets when they last met in the World Cup last year. Both India and Pakistan have been playing some amazing cricket and it was hard to choose a winner between both sides on paper.

When the game did start, Indian bowlers were on their money. Especially Bhuvneshwar Kumar and Hardik Pandya who grabbed 4 and 3 wickets respectively to bundle out Pakistan for 147 runs. The pitch was a little sluggish but it seemed India will finish the game off easily with a victory. But that was not to be. India were comfortable in the run chase for most of it except for the last when a flurry of wickets put them in a little spot of bother.

But like always, Pandya the finisher came to India’s rescue and helped the team register another victory. This time it was with the bat. He scored a brilliant 33 runs from 17 balls that included 4 fours and 1 match winning six. India started the Asia Cup as favourites and now after defeating Pakistan have lived up to the tag of the favourites.

Hopefully the trend will continue. But Hardik Pandya stole the show and he has shown he has become India’s key player again. He will be India’s trump card in the Asia Cup and the T20 World Cup as well.

It has almost become a ritual that any place team India travels to these days and any team they play up against, they will come back home with a trophy. Or better yet they just reroute to another country, go there and win another one on the trot. First Ireland, then England then West Indies and now hopefully Asia Cup. The men in blue are in some serious form and they will be looking to make sure that they continue the same run at least till November when the T20 World Cup ends.

We all saw the first game in the Asia Cup were India defeated arch rivals Pakistan to secure a well deserved victory. Hardik Pandya was the star of the show as he contributed both with the bat and ball. He has been India’s best player in the last 6 months.

Tough times don’t last, but tough people do. And, the best thing about time is that it changes. Take Hardik Pandya’s last six months as an example. After making a very interesting rise in the IPL and then at the international level, Hardik soon became India’s go-to player in all three departments of the game. But like always something had to go bad.

As you sow, so shall you reap. And now all his efforts have paid off. He has become India’s main player in the XI. So from being out of the team and struck-by injuries and bad form, Hardik Pandya has come back successfully to become India’s Captain and an IPL winner.

Did Loss Of Captaincy Go A Long Way In Virat Kohli...