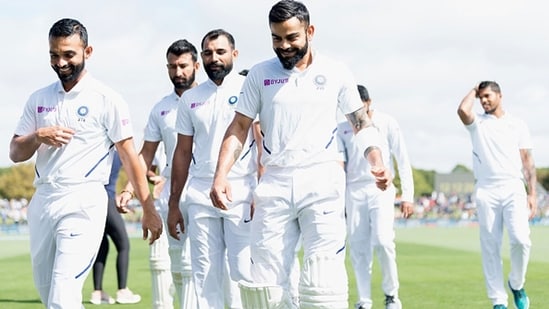 It was all set to be a cracker of a game. A game of cricket like a game of cricket should be. Full of ups and downs, full of twists and turns. On the first day India looked done and dusted. By the end of day 3, so did England. By Day 4, Root had England in control but India were still the favourites. And on the 5th day, it was as evenly poised as it could be. We were now set for another beautiful day 5 test cricket treat. A 5th day Trent Bridge pitch, India needing 157 runs to win, England needing 9 wickets. Either of the results were possible with India having the slight upper hand.

In England, more than the players, the pitch, the bat or the ball, it’s the rain Gods who have their say over the final outcome of the game and this time too, the trend continued at Trent.

We were deprived of another special day of a test cricket treat and the first match had to end in a draw with the WTC points shared between both teams.

Both teams had their own set of woes. England’s batting line up from 1-6 was almost a total flop and had it not been for Joe Root’s brilliance and fight in both innings of the tests, England would have collapsed and given up the game to India very sooner. Technically their batsmen did not look sound against the Indian bowlers in such bowling friendly conditions. So they might be looking to rake in a lot of changes but even with that being done, it will be hard for them to face the fiery Indian pace attack and more importantly a super fiery Bumrah.

India certainly were the better team in the first test of the series but with that being said it is not like India don’t have matters to address. Their middle order has been crumbling for quite some time now. The famous trio of Kohli, Pujara and Rahane had scores of 0, 4 and 5 respectively in the first test. They looked down and out in the World Test Championship final too. Whilst there is no doubt regarding the class of Kohli, Pujara and Rahane, they have to now make their bat speak rather than their talent and name defending them. And what better stage to it than at Lords – The home of cricket.

Yep, you read that right. Now the England – India caravan moves on to Lords – The home of Cricket, where the second test between England and India will be played. The last time both these teams played at Lords, India were bundled out for 107 and 130 in the two innings they played. James Anderson took 9 wickets in that game. But the good news for team India is that both of England’s senior bowlers Anderson and Broad are doubtful for this game. While Broad has been ruled out of the series with an injury, Anderson too is highly unlikely to play in this game with a quad-injury and England wouldn’t want to risk him.

Also, last time when India played England at Lords, they were without Jasprit Bumrah and this time when they do, he is there in their ranks, with all guns blazing after having picked 9 wickets in the opening test of the series. With a pitch like Lord’s where there’s bounce, a little grass and some stickiness too, he just might be too hot to handle for the English Batsmen.

India vs England, 2nd test, Weather & Pitch Report
When the game is being played in England, the weather conditions become as important as the pitch report or the team news because it can rain any & many time(s). Luckily for us this time, the weather looks much better than it was at the Bridge. The skies are expected to remain clear for the whole match except on Sunday where there may be a slight chance of rain.

The pitch at Lord’s should be like a typical pitch at Lord’s. It should just be like the pitch against New Zealand. It would be a little slow whilst providing something to both the bowlers and the batsmen though there could be more grass offered on the pitch.

With Thakur out due to injury, India would be looking to rope in Jadeja to get more solidity in batting too while they could also rope in Ishant Sharma who has been in some fine form and go with their template of playing 4 bowlers as Virat Kohli suggested.

With Broad out and Anderson likely out due to quad injury, England could make wholesale changes to their side which they will name at the toss. Mark wood is likely to be played and there might be a debut in store for Saqib Mahmood too. The inclusion of Moen Ali in the squad also means that he will be playing. Will England play 5 bowlers? Will they finally play a spinner this summer? All answers will be awaiting us at the other side of the toss.

Perth Scorchers beat the Heat to make it to final