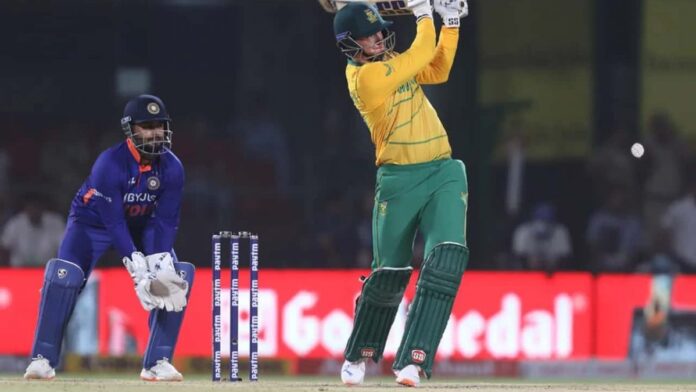 Remember how Justin Langer said – ‘Never ever underestimate the Indians’

Maybe South Africa was not listening. But now they have been handed a lesson by team India. After being massively outplayed in the first two games of a 5 match series, India did not lose hope.

And, ‘hope they say is a good thing, maybe even the best of things’.

And it was India’s self-belief that they did well to come back in this series and make sure that it is all square and all to play for when India will face South Africa in Bengaluru for the 5th T20I.

The 4th ODI in Rajkot did not start well as far as India was concerned. They knew that they needed to win this game and maybe that pressure went inside their heads. India were at 59-3 after the first ten overs and it looked all but bleak for India from there. The ball was doing a little too much and India had two new players at the crease. And this was supposed to be a belter of a pitch where even 170-180 was not safe. And India were looking far from that at the moment.

And that’s when it happened.

India’s last hope was this last pair of batsmen. Hardik Pandya and Dinesh Karthik continued their good IPL form and both of them started counter-attacking. At first quite slowly and smartly and then they just went berserk. Dinesh Karthik showed why he was called back to the Indian team by becoming the oldest Indian to score a T20I fifty at 37 years of age. And it was not a run-a-ball type of fifty. He scored a brilliant 55 runs from 27 balls that included 9 fours and 2 sixes with a strike rate of 203. He showed that age is just a number baby.

Hardik Pandya too was in his element and he started hitting the ball all around the park and started making sure that the scoreboard was moving at a rapid pace. When he smashed Shamsi for two back-to-back sixes, it was quite evident that he was batting with some confidence. And Hardik Pandya with confidence, finishing the innings can be too hot to handle for any team. He scored 46 runs in 31 balls that included 3 fours and 3 sixes.

India set a target of 170 on a double-paced track and knew that they were definitely in the game now. But they needed to start well as this South African side was a batting powerhouse. And that’s when Avesh Khan decided to take things into his own hands. He was just too good for the South Africans and he bagged 4 wickets in the innings giving away just 18 runs.

India won the game by 82 runs and now it is very nicely set up for the 5th and final T20I to be played in Bengaluru.

Who do you think will win? Do let us know in the comments below.