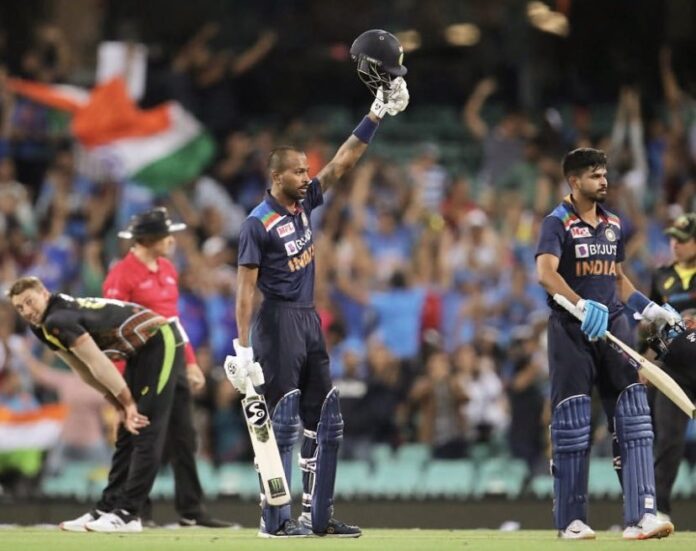 India prevailed over Australia in the 2nd T20 grabbing the series 2-0.

It was sweet revenge for the Indians who had lost the ODI series but now, are clearly on a roll, having won 3 matches in a row.

The Australians were led by Mathew Wade in the absence of Aaron Finch due to injury, and he led from the front with a swift half-century at the top of the order.

His 58 came off just 32 balls and was studded with 10 sparkling fours and a mammoth six.

Ironically, he got out while going for his second six. Kohli dropped the skier but kept his wits to return the ball to KL Rahul who ran out Wade.

Before that, pacer T Natarajan had dismissed D’Arcy Short with a fine delivery in the 5th over, confirming his value to the side for the 2nd time in succession.

In fact, Natarajan later returned to dismiss Henriques at a vital juncture in the 19th over, which might have reduced the Aussie total by at least 10-15 runs as Henriques is capable of big hits.

Ultimately he ended with unreal figures of 2 for 20 in 4 overs.

Steven Smith was the only other batsman to contribute with a steady 46 off 38 balls. Glenn Maxwell did not hang around long enough to do genuine damage, and though Henriques and Sams tried to use the long handle, the Aussies ended with 194.

It was a good total but in the absence of the Aussie frontline pace attack, India could entertain hopes of chasing it down.

India needed a strong start from their openers which they got only after they began on a cautious note.

Once Rahul smacked Tye for a six on the free hit, the Indian openers went bonkers as they smashed 19 off Maxwell’s one over.

The duo added 56 in no time for the first wicket and just when both of them were settling in Rahul threw it away.

Then came Kohli and the run flow took a different dimension. He along with Dhawan picked an odd boundary and rotated the strike.

Dhawan though departed after his fifty But Kohli continued to muster the runs. He though departed at a crucial juncture but Hardik Pandya and Shreyas Iyer in the middle ensured that they cross the fence in the end.

Shikhar Dhawan’s 52 and captain Virat Kohli’s 40 along with a 22-ball 30 from KL Rahul helped India bring the equation down to 14 runs needed off the last over in their chase of a target of 195.

Pandya, who had back-to-back fours in the second last over bowled by Andrew Tye, was on strike against Daniel Sams. The target was 14 in the last over.

Hardik Pandya smashed two sixes in the last over to take India to victory.

India have thus taken an unassailable 2-0 lead in the series and bounced from the defeat they suffered in the ODI series before this. It also marks the first time since 2016 that India have managed to beat Australia in a T20I series home or away.

Did Loss Of Captaincy Go A Long Way In Virat Kohli...