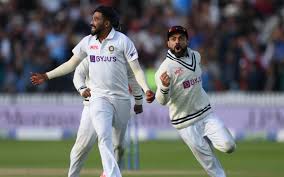 Never ever underestimate the Indians – that’s what Australian head coach Justin Langer said after India defeated the mighty Australia in their own backyard. That too when they were languishing far behind in the game and almost totally defeated. But this Indian team almost never gives up and they snatched victory from the jaws of defeat and won the series with a half injured, half depleted side. Maybe the English should have paid more attention and done their homework.

On the start of Day 5, England certainly looked the team with the upper hand with the odds in their favour. They had India at 181/6 and India had the lead of just 154. With only Rishabh Pant to contend with and then the Indian tail that had not wagged so much in the past, England knew they would be all over India if they could get Rishabh Pant out early on day 5 and boy did they manage to that easily and it looked like the final nail in India’s coffin.

But alas! That was not to be.

Ishant and Shami turned batting all rounders playing strokes, defending, driving and doing everything to orchestrate a fight back. Credit to both of them, they did that until Ishant got out.

Now the onus was on Bumrah & Shami to try and take India to a atleast a slightly competitive score to defend. They started slowly and were trying their best and Bumrah was certainly in the mood to bang a few shorts out of the ground after his tussle with Anderson earlier. Just then while Bumrah was batting, there was another exchange of words between Jos Buttler and Bumrah making him even more charged up than before. As commentator Harsha Bhogle mentioned on air “ I have never seen Bumrah like this, and maybe I am not going to ever”. Bumrah was on fire, he was playing a straight drive like Sachin and that two twice, then showing his defence, showing his drives, he even miss-played a few that went to the boundaries. But as they say in cricket, it doesn’t matter how the boundaries come as long as they keep coming.

The “batting-allrounder” Shami too was at his terrific best. He was playing the innings of his life. He was driving, slogging and defending quite superbly. He and Bumrah snitched together an unbeaten 89 run partnership for the 9th wicket at Lords (Yes, you read that right).

Shami went on to score an unbeaten 56* and Bumrah with a 34*. How they managed, that no one will ever know, but don’t waste your time trying to figure that out. There was an outgoing ball from Anderson which Shami just drove through the gap through covers. Virender Sehwag on air was happy and surprised at the same time and said “Even I have not driven Anderson through the covers in England throughout my whole career”. If that doesn’t tell you a story, maybe this stat will :

After his unbeaten 56* Shami now has a higher score at Lords – The home of Cricket, than Sachin Tendulkar, Virat Kohli, AB de Villers, Ricky Ponting, Jacques Kallis & Cheteshwar Pujara. Yep, you can read that again, it’s still going to be true.

After declaring the innings, India were in the driver’s seat in the game. It would either be an Indian win or there would be a draw. Either way, they still had the uphill task of getting England all out in two sessions in 60 overs and that too when there was not much of an assistance from the pitch as a day 5 pitch normally gives. But this Indian team was too charged up after their few confrontations with the English players on the pitch over the past 3-4 days and that proved to be the gasoline. They were on fire and even that would be an understatement. Virat Kohli himself mentioned this during the post match presentation ceremony. After what happened between Yuvraj & Andrew Flintoff during the T20 World Cup and the Six 6’s that followed from Yuvi’s bat, one would have thought that England would not repeat the same mistake of firing up the Indians but like we said earlier, they have not being paying enough attention or maybe they did not do their homework.

The Indian bowlers ran riot over the clueless English batsman in their own backyard. Siraj bagged 4, Bumrah bagged 3, Ishant bagged 2 and Shami also a wicket as they defeated England handsomely by a margin of 151 runs.

K.L Rahul was undoubtedly the Man of the Match for his stellar knock in the first innings which helped India set up a big total. Credit to Bumrah and Shami too, who helped the team out in bad situations every possible time. The 100 run partnership between Pujara & Rahane was equally important.

This victory coming after what happened at Australia, shows the grit and the ‘never say die’ attitude of new India. They just don’t give up. Period.

With this win, Virat Kohli becomes the only third Indian Captain to have won a test at Lords after Kapil Dev and M.S Dhoni. His record as India’s test Captain just keeps on getting better & better. With what they have done in this test, expect India to create history in England and finally win a test series after many years. Until then, enjoy these performances with your fingers crossed.

Siraj also deserves a special mention in the grand scheme of things as he was outstanding for India and was India’s highest wicket-taker in the game bagging 4 wickets each in both the sessions taking his tally to 8. He bowled superbly when India needed him the most specially on the last day. He took two wickets in an over three times during this match which certainly makes him one of the biggest game changers for India.

RCB vs KKR, Another Day another IPL thriller – RCB win...