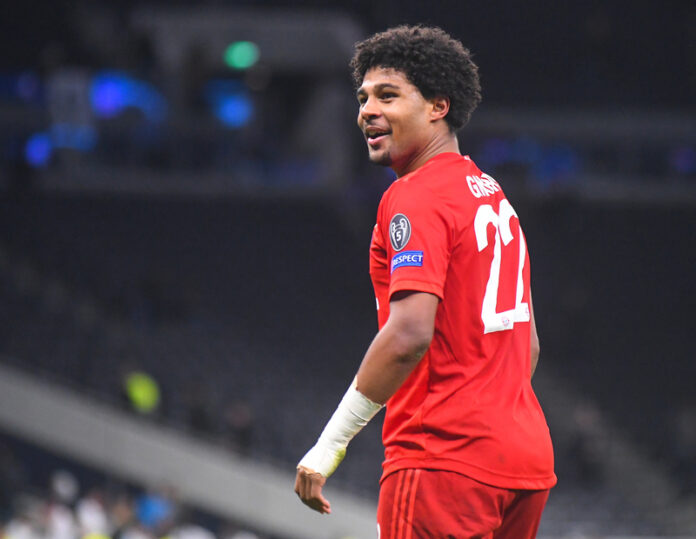 Finally, it was Serge Gnabry who catalysed Bayern Munich’s Champions League semifinal victory over a spirited Lyon side.

Less than a week after demolishing Barcelona 8-2 in the quarter-finals, Bayern Munich met with strong resistance from Les Gones.

Rudi Garcia’s team started the match pretty well, but failed to capitalize on the early chances that came their way. Memphis Depay hit the side net from a promising position, and Karl Toko Okambi rattled the post minutes afterwards.

By then, it was evident that the tie will not be a walk in the park for the German champions.

However, they did take the lead in the 18th minute as Serge Gnabry got his name on the score-sheet. The former Arsenal man was an energetic presence in the field against Barcelona, and he seemed to have started this game where he had left off five days ago.

Gnabry cut in from the right and found the top corner of the net, leaving Lyon custodian Anthony Lopes helpless.

Lopes, who had kept out Leon Goretza’s effort a few minutes ago, had no chance of stopping Gnabry’s shot, which rocketed into the unreachable top corner of the goal.

In the later stages of the game, Gnabry would come back to haunt him again.

Robert Lewandowski was uncharacteristically wasteful when an Ivan Perisic pass found him inside the Lyon box. He struggled to launch a powerful finish, but Lopez was also incapable of getting hold of the ball properly.

The rebound then reached Gnabry, who did no mistake to make the score line 2-0.

Gnabry also tested Lopez with a powerful drive in the first half, but this time, he failed to score.

Lyon continued to probe for a way back into the game, despite being two goals down. They were making things happen in the Bayern half, but lacked cutting edge in front of the goal.

Houssem Aouar, who has been linked with a move away from Lyon this summer, then found Ekambi in the box. While Aouar did brilliantly to set Ekambi up, the Cameroonian’s effort was void short of a lethal touch.

His shot found its way straight into Neuer’s gloves and he had to do nothing but stand on his position to grab the ball.

Phillippe Coutinho found the back of the net later on for Bayern, as he collected Thomas Muller’s pass with great composure and provided an ice-cool finish. But, Goretzka’s involvement in the goal rendered it offside.

Bayern got their third goal nonetheless in the form of a Lewandowski strike. The Poland ace guided a beautiful Joshua Kimmich cross into the net to put the final nail in Lyon’s Champions League ambitions.

It was the former Borussia Dortmund marksman’s 15th Champions League goal of the season.

Lyon will not be featuring in next season Champion’s League since they finished 7th in Ligue 1 this season.

Winning the Champions League would have been their only route to the competition next season, at the expense of Dutch champions Ajax Amsterdam, as their league wasn’t completed because of the pandemic.

But nevertheless, well done Lyon for getting this far!