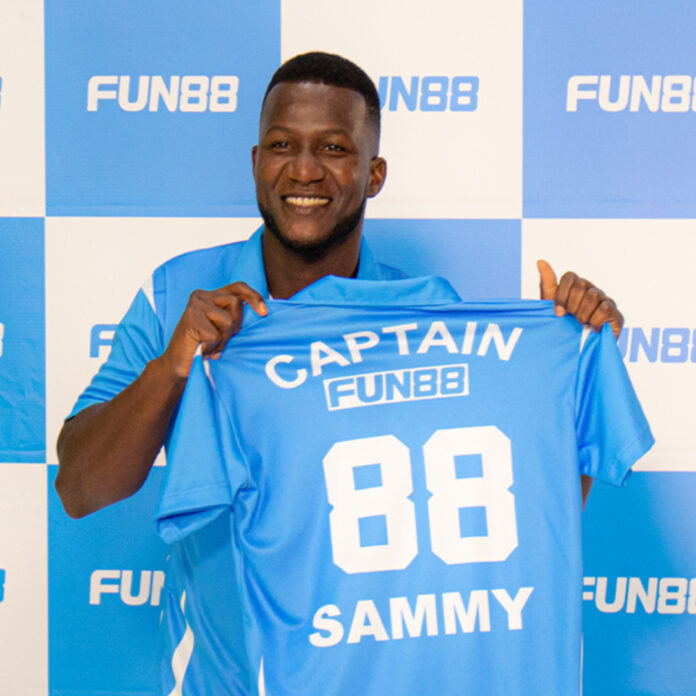 Fun88, the leading sports platform, today announced the signing of Daren Sammy as its brand ambassador.

Sammy is a two time T20 World Cup winning captain for West Indies with a strong fan following in India and the sub-continent.

Sammy has also played professionally in the Indian Premier League for Hyderabad.

Fun88 India is a renowned brand in the global & Indian sports domain with an offering of real time news and analysis on various sports leading with cricket, tennis, football, kabaddi and much more.

As a kickstart to this partnership, Sammy will be a part of a series of brand films targeting sports fanatics in India.

The brand films will be a part of Fun88 India’s upcoming integrated branding and marketing campaign #LagiShart.

Speaking of the association with Daren Sammy and bringing him on board as a face for the platform, a Fun88 India spokesperson said, “Darren is a leader and an inspiration to everyone. His success & contribution in Caribbean cricket is remarkable.”

“Daren’s fan following in India is huge and our partnership with him is synonymous to our vision of making Fun88 India a go-to destination for sports content in India. “

“We are extremely excited about this association and hope that we are able to leverage Daren’s following to take Fun88 India to newer heights.”

“My relationship with the number 88, which has been my jersey number too, spans over two decades and with Fun88 India I see a synergy to make it the go-to destination for sports enthusiasts in India.

Having followed Fun88 for a while, I have seen how the platform has evolved over the years.

“It has celebrated sports and cricket and has brought fans together since inception.”

“I am excited about this association with the team at Fun88 India and deeply thankful for being given the opportunity to be its ambassador and face.” added Daren Sammy.

Launched in August 2020 in India, Fun88 has become the leading brand in online sports offering one of the broadest portfolios of markets and odds across a variety of sports and leagues.

With customer satisfaction and entertainment at its heart, it has developed an innovative experience via the latest technology and games alongside impeccable and personalised customer service.

Fun88 has been very active in sports marketing globally over the past decade. Being the official partner for Carribean Premier League, Fun88 has been instrumental in celebrating cricket all over the world.

Fun88 has also been a valued partner of the Tottenham Hotspur football club since 2012.

It was also the jersey sponsor of Premier League club Newcastle United F.C. Apart from football sponsorships, Fun88 was also instrumental in associating with the basketball legend Kobe Bryant.

Hardik Pandya’s Epic Comeback – From Being Out Of The Team To Coming Back...

June 7, 2022
0
After 2 months of IPL action, it is finally time for the cricketing summer to start on all folds all across the globe. In this part of the world, Sri Lanka will...
Read more

May 31, 2022
0
Worried what to do now that the IPL is over? Thinking how you will spend your evenings? Well, Don't Worry Fun88 is here to your rescue.
Read more