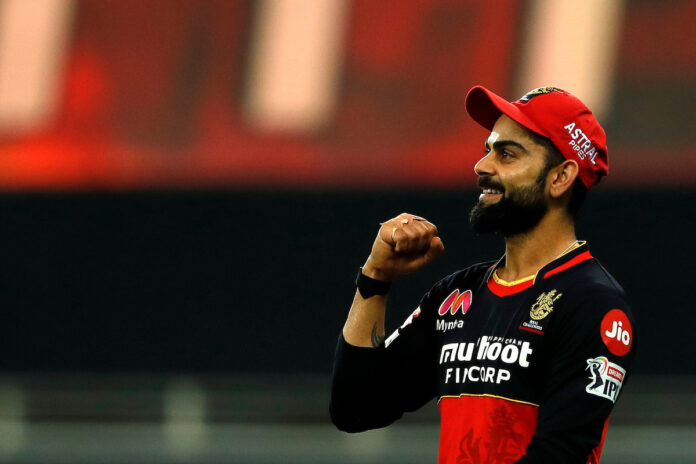 What a rollercoaster of a match this was!

Deepak Chahar conceded 10 off 3 balls bagging one wicket and Jadeja gave away just 7 off 2 overs for CSK, which are nothing short of sensational figures.

In fact, the RCB run rate was sluggish throughout and by the 13th over, they were scoring at the rate of just 6 an over.

Devdutt Padikkal and Kohli started slowly, pushing the Royal Challengers to 65 for 1 in ten overs.

However, in the next over, Padikkal (33 off 34 balls) tried a needless lofted shot off Shardul Thakur but only managed to mis-hit to mid-off. Three balls later, Thakur bowled another off-cutter, that took an outside edge off AB de Villiers’ bat, with him at zero.

When Washington Sundar fall in the 15th over, RCB were at 93 for 4.

Then the Virat Kohli show started.

Kohli shows how it is done

Kohli scored 90 which means he scored 54% of the runs RCB scored, which is a staggering ratio!

Kohli realised that he had to be there till the very end, the reason he played steadily till the 10th over, cutting out all risky shots.

He got his 50 in 39 balls by pulling Thakur to the fine-leg fence.

In the last overs, he was ruthless against Curran, Thakur, and Bravo, hitting 3 sixes and a four.

Curran was so shaken that he lost concentration and gave away two off-side wides in the 18th over while Thakur bowled a full-toss at the batsman’s body in the 19th.

Kohli’s best shot was in the 20th over when he shuffled across, picked an attempted Bravo yorker early and steered it away through fine leg for four despite losing his balance and falling on the ground.

Thanks to Kohli, RCB plundered 66 runs in the last 6 overs finishing at 169 for 4 which looked impossible at the end of 14 overs.

The Super Kings were chasing for the seventh time this season, and it was the same-old story.

It’s clear that Raina’s absence is hurting them big time and they might have erred in placing their trust in the old guard, who look a bit jaded and lack the spark.

Kohli has huge confidence in his 2 spinners, Chahal and Sundar and it’s obvious that this has helped elevate their prerformances.

Yesterday, it was Sundar’s chance to come to the party and he duly complied removing both the in-form Super Kings openers Faf du Plessis and Shane Watson, limiting them to 26 for 2 – their lowest powerplay score this season.

To Sundar’s credit, he was clearly looking for wickets and not just to contain the runs.

Sundar flighted the ball generously and induced a miscued hit from du Plessis (8 off 10) who holed out to Morris near the longer leg-side boundary.

When Sundar strayed down the leg side Watson (14 off 18) slog-swept him off for four, but when the batsman tried to repeat the dose off the next ball, he was bowled by a quick slider.

By the time MS Dhoni came out to bat at No.5 in the 15th over, the asking rate was hovering around 15.

Even CSK’s most ardent fans would have known that it was game over and looked like a lost cause.

The end was swift and humiliating as Isuru Udana foxed Rayudu, CSK’s top scorer with 42, off a slower ball delivered from the back of his hand.

Kohli’s jubilation suggested this was a dismissal they had planned for.

Chris Morris chipped in with 3 wickets as the Chennai lower order collapsed in a heap, helping RCB rise to 4th on the table.