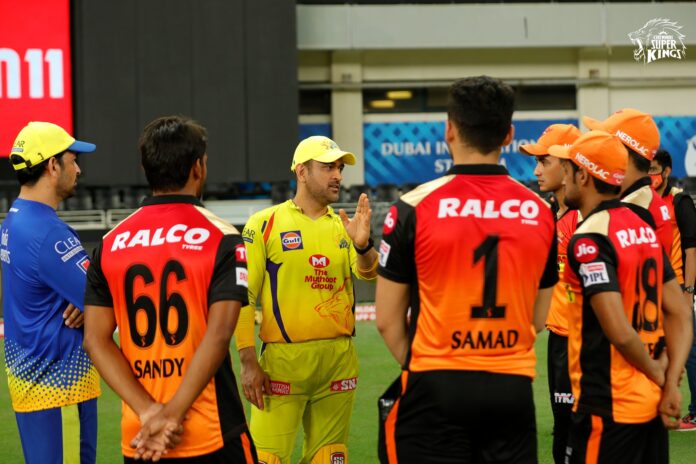 When a crisis happens, in life, you see 2 kinds of reactions.

People either get paralysed with fear and just roll over and die.

Or else, they keep their wits and try out new things, an alternative approach that helps them overcome the odds.

But to do that, a person needs an infinite reservoir of a vital quality.

With MSD at the helm, you can be sure that lack of confidence will never be a factor.

CSK tried a new approach and it paid off brilliantly!

That’s the big message that came out of their vital win against the Sunrisers Hyderabad yesterday.

CSK sent out Sam Curran to open the innings which was a huge statement of intent.

Curran is a naturally aggressive player and this move signalled CSK’s determination to make a fight of it.

Du Plessis got out to a first ball duck nicking the ball to keeper Bairstow but such is Curran’s temperament that it didn’t cramp his style.

In the 4th over, inevitably, Curran exploded. He hoisted left-arm seamer Khaleel Ahmed for two fours and two sixes.

CSK moved to 35 for 1 in the 5th over when Sandeep Sharma bowled a straight one that bowled Curran.

Shane Watson, who had come in at No. 3 and Ambati Rayudu played carefully and took the score to 116 when Rayudu departed to a smart catch by Warner off Khaleel Ahmed, to be followed by Watson soon after.

Both made tidy forties that helped CSK to a decent position of 120 for 4 in 16.2 overs.

This put Jadeja and skipper Dhoni in a vantage position to launch a final assault that duly arrived with 47 runs coming in the last 22 balls.

This spell of big hitting saw five fours and 2 massive sixes, one each by the 2 batsmen.

The pick of the bowlers was Sandeep Sharma with just 19 runs off 4 overs, with 2 wickets.

Surprisingly, both the SRH spinners were ineffective. Rashid Khan and Nadeem went off 59 off 8 overs.

Khan was himself to blame for this, having dropped Watson for 20 off his own bowling. Later both Watson and Rayudu capitalised on this in a big way by thrashing Khan for big sixes in his last over.

The final total of 167 was a sufficiently challenging, as later events proved.

CSK has a stock of high quality all-rounders and it’s fair to say that this victory was made possible through their contributions.

Sam Curran continued his good work by bagging the prize wicket of Warner in the Powerplay.

This was a telling blow that knocked the stuffing out of SRH as CSK started applying a choke hold from which SRH couldn’t extricate themselves.

The 2nd all-rounder to make a mark for CSK was the evergreen Bravo who created a run-out out of nothing by catching Manish Pandey out of the crease.

27 for 2 became 59 for 3 when Bairstow was bowled by an arm ball by surprise, surprise, another all-rounder, Jadeja!

Kane Williamson struck the only dissenting note with a 57 but when spinner Sharma got him, with a ball that turned away and Shardul Thakur completed the formalities with a well-taken catch.

In fact, Thakur’s spell of 10 off 2 overs was vital in the end overs and ensured that the margin of victory was a handsome 20 runs.

Dwayne Bravo too played his part by keeping it tight in the final overs and his figures of 2 for 25 was ample testimony to his effort.

Wasim Akram tells Sachin to hit Covid for a SIX