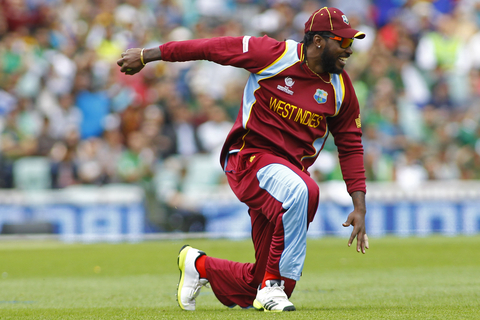 Christopher Henry Gayle or Chris Gayle, as he is widely known, will be remembered for a long time.

Not just for the runs he scored but also, the way he scored them.

His exploits are many.

He is the leading run-scorer for West Indies in ODIs.

Gayle is also the first man to score centuries in all three formats of international cricket.

Yet Chris Gayle is not respected

He is not looked at in the same vein, as say, a Virat Kohli or Kane Williamson.

There is a good reason for that.

There is a general consensus that Chris Gayle was and is a flat-track bully.

His supporters, on the other hand, feel this is not true. And as a batsman, he is more technically sound than people give him credit.

Today, we look at this as objectively as possible. And see if he really deserves the moniker of a flat-track bully

Who is a flat-track bully?

Before we pass judgment on Gayle, let’s be clear what a flat-track bully is.

Cricket pitches have different characteristics. Some offer a lot of assistance to bowlers in the form of seam movement and variable bounce which makes it difficult for the batsman to judge the trajectory of the ball. As a result, stroke-making is difficult and mistakes are more likely.

On the other hand, there are pitches that offer very little assistance to bowlers.

All the batsman has to do, on such pitches is line up the ball and swing.

The ball comes off slowly off the pitch, leaving the batsmen with extra time.

The batsman gets more time to decide which stroke to play.

And also, more time to execute the shot.

These pitches are flat tracks and batsmen who score runs only on these pitches on a regular basis are called flat-track bullies.

So is it fair to call Chris Gayle a flat track bully?

Apart from being the highest run-scorer for West Indies and the first to score centuries in all three formats of the game at the international level, he has the most centuries for a West Indian.

Gayle has the fastest double century in ODIs to his name.

He is also the first to hit all 6 balls in an over for a 4 in a test match. And yes, he holds the record for the most runs in a single ICC Champions Trophy series.

However, the label of flat track bully often comes up due to Gayle’s murderous six-hitting.

Gayle has hit 515 sixes in international cricket which is the most by anyone.

He is also the first person to hit a six off the first ball of a test match.

That, along with his ability to score at a rapid clip, creates a sense that he is completely dominating the bowlers.

But let’s delve a little deeper.

Let us compare him to Virat Kohli.

Test cricket is seen as the format that is least friendly for a flat-track bully.

While it is not the same, the incredible thing here is that it is not too far apart.

Some might argue that Gayle has played on more batsmen-friendly pitches than Kohli.

But we have to remember that Gayle also played a lot of his cricket when the rules were a lot more in favour of the bowler. Such as fewer field restrictions and ball-change rules that were a lot more beneficial to bowlers.

So it is difficult to compare the quality of Gayle’s runs with Kohli’s.

Chris Gayle and the Windies teams he played for

If you look at all the teams that Gayle has been a part of, they can be broadly classified into two.

Either he has been a part of teams with a very strong batting line-up that consisted of guys like Brian Lara, Shivnarine Chanderpaul, and Ramnaresh Sarwan.

Or he has been part of really weak teams where the other batters averaged between 30 and 40.

Ironically, both these teams pigeonholed Gayle into the same specific role.

In the former, he had the freedom to accelerate from the very first ball and get the team off to a good start. He knew there were others who could take the team through the rest of the innings even if he go out early.

In the latter case, he again had to score at a brisk pace so as not to run out of batting partners.

Then there is the whole Caribbean batting culture and the advent of T20 cricket.

Suddenly, being an explosive batsman who went after every ball was a very lucrative thing do.

Especially in light of all the problems with wages that the West Indian cricketers had with their board.

In spite of all of this, Gayle has been playing cricket at the highest level for 22 years.

That is no easy feat and no flat-track bully can survive at the highest level of cricket for this long.

Is Gayle a cricketing great?

To objectively answer this question, we have to let go of the notion that ONLY technically gifted batsmen like Sir Don Bradman or Sachin Tendulkar can be considered as GREATS.

At the end of the day, cricketing greatness should be measured based on three things.

Let us look at each of these individually.

The first one is easy to judge. Just look at the statistics.

There are no two ways about it. On most statistics regarding batsmen, Gayle is in the top ten.

Then there is the second metric. This is again difficult to quantify.

But his record clearly shows he has won many matches single-handedly for the Windies. Some that were almost impossible while being part of a weaker outfit and so here too, he is a cut above the norm.

Finally, there is question of impact.

And there is no denying that Chris Gayle has been one of the most impactful cricketers of the last 10 years.

Like any other batsman, he can and will take advantage of an easy pitch. But his explosiveness makes the domination a lot more prominent.

However, he has scored runs on difficult pitches and in difficult situations as well. Just because he is unconventional in the way he scores his runs does not make him any less of a cricketer.

He has had a significant hand in making modern cricket what it is.

And that alone makes him a cricketing great.