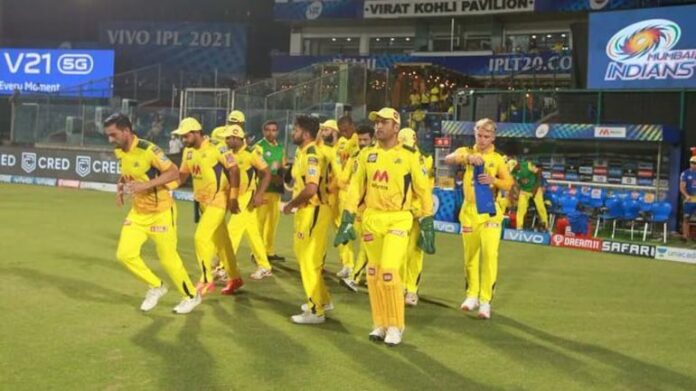 After the turmoil they had last year, many experts and pundits counted them out and predicted they would have severe problems this year too. But CSK being CSK, did not just qualify for the play-offs, they bossed their way into it becoming the first team in the tournament to qualify for the play-offs. They have won 9 and lost 2 out of the 11 games they have played this season and look set for the top 2 spots which guarantees them two shots at the finals. Meanwhile SRH have become the first team to be officially knocked out of the tournament.

During the game against Sunrisers Hyderabad, things became pretty edgy at the end with 17 needed off the last two overs and Rayudu playing a lot of dot balls in the end. However, just like the old times, Sharjah had a script of it’s own and this time it was one which brought back a happy memory and a million smiles. MSD finished it off in style with a 6 over long one and the ball sailing on to the sky. We are sure the next picture flashing in your mind will be of Wankhede, 2011. Yes, it was almost the same shot.

Openers Ruturaj Gaikwad and Faf du Plessis have been giving them solid starts throughout the tournament. They have already crossed the record of most runs scored by a CSK opening pair in a season previously held by Michael Hussey & Suresh Raina of 587 runs in 2013. They have been one of the biggest reasons why Chennai have done so well this season even with the middle order struggling. All rounders Dwayne Bravo and of course Sir Ravindra Jadeja have been into the knick of things too. They have bowled superbly, have always fielded brilliantly and then they also provide those power hits when their team needed them the most in crunch situations. Remember how Jadeja slammed the purple cap holder Harshal Patel for 37 runs in an over in the first leg of the IPL? Sure you do!

With Delhi Capitals and Royal Challengers Bangalore fighting for the second spot and other teams like Kolkata Knight Riders, Mumbai Indians, Punjab Kings & Rajasthan Royals all fighting neck to neck for the fourth qualification spot, every match becomes very important for all teams which spices up the tournament brilliantly as we inch towards the play-offs. Who do you think will qualify. We certainly do not know. Maybe you can help. Let us know in the comments below.