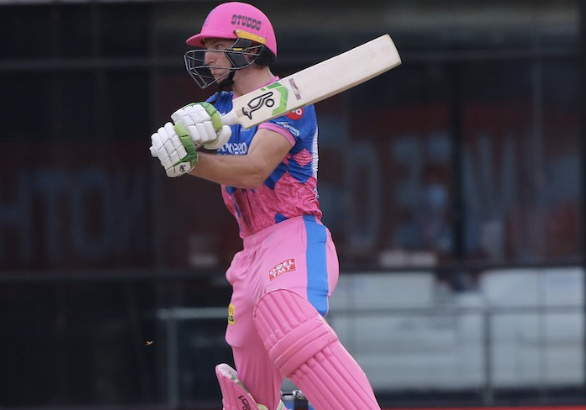 Rajasthan Royals put up an all-round effort to clinch a vital win over Sunrisers Hyderabad, whose misery continues despite a change in leadership.

Kane Williamson had taken over the captaincy from an under-fire David Warner.

However, Rajasthan, jump to fifth with six points, with this victory.

RR had one person to thank for this change of fortunes – Jos Buttler.

Buttler’s maiden T20 century that comprised 11 fours and eight sixes and consumed only 64 balls resulted in a match-winning 124.

Buttler was in murderous form, hitting his last 74 runs off just 25 balls, with his fifty coming in 39 balls.

Some poor tactical calls by SRH also helped the Royals.

New skipper Williamson finished Rashid’s 4 overs by the 11th over and this relieved the pressure on the Royals as they knew that SRH lacked potent wicket-taking bowlers in the latter half of the innings.

Chasing an imposing 221, SRH started brightly with their openers, Bairstow and Pandey hitting the RR bowlers all over the park, in the power play.

Jonny Bairstow began aggressively by smacking Chetan Sakariya for a six and two fours off the bowler’s first three balls of the match.

The first 6 overs produced 57 runs when Mustafizur got the first wicket, cleaning up Manish Pandey with a full length delivery for 31.

Tewatia got the big wicket of Bairstow for a 21-ball 30 and Kartik Tyagi chipped in with the dismissal of Kane Williamson.

Mustafizur was the star of the show with the ball, bagging 3 wickets for 20 in 4 overs.

Sunrisers lost wickets at regular intervals and never got going in the chase.

The match featured a spectacular running catch from IPL debutant Anuj Rawat, off the bowling of Chris Morris to get rid of Abdul Samad.

SRH are still looking for their second win of the tournament and need to rediscover their mojo fast.

Will Rohit Sharma miss the Aussie tour? If yes, who is to blame?

Buttler and Malan’s efforts in vain as India claim series