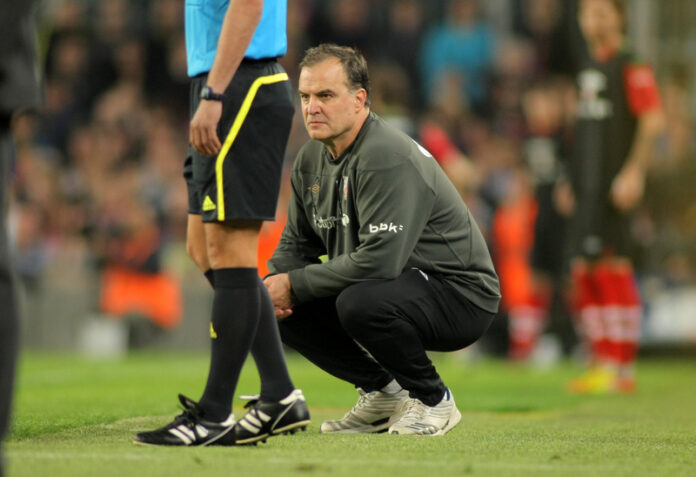 Come September we will be watching Leeds United playing in the Premier League for the first time in 16 years.

Having won the English top-flight three times, the Peacocks used to be one of the strongest sides in the division.

But, their lengthy exile from the topmost tier of English football has somewhat reduced their status as a football giant.

Return to the Premier League is the first step towards redeeming their lost glory, and thanks to a certain football genius named Marcelo Bielsa, Leeds fans can dare to dream again.

We will discuss how Bielsa masterminded Leed’s return, but before that, let us look at Leeds’s fall from grace.

Leeds. A club with history

After being established in 1919, Leeds United have been predominantly a top division side.

Their recent 16-year banishment from the Premier League is the most prolonged period of top-flight absence in the club’s history. Under the management of Don Revie, Leeds enjoyed an extraordinary spell of success in the early ‘60s and the ‘70s.

Revie took charge of the club in 1961 when they were battling relegation from Second Division. The former Manchester City ace earned them First Division promotion in 1964. When Revie left the club in 1974 to become the England manager, he had won two First Division titles, a FA Cup, a League Cup, and two European Inter-Cities Fairs Cup trophies with Leeds.

Leeds won the league for the third time in 1992. Before their lower league demotion in 2004, they were a prime contender for European places and also made it to a Champions League semifinal in 2001.

David O’Leary delivered a series of top 5 finishes from 1997 to 2002, which made the club hierarchy confident of future success.

Then chairman Peter Ridsdale took out hefty loans to finance deals for top-sought players across the continent. He envisioned a star-studded squad that would bring regular European football at Elland Road and generate voluptuous amounts of revenue.

The club’s academy was also brimming with talents like James Milner, Aaron Lennon, and Paul Robinson. The future looked promising indeed for the Yorkshire outfit.

Having spent so much on such big-name players, Leeds couldn’t afford to finish outside of Champions League places. While they did manage to set up a Champions League semi-final against Valencia in 2000/01, they failed to qualify for the tournament next season.

By 2002, the club found themselves accruing a net loss of £50m in the transfer market.  That was a colossal number considering the dynamics of the contemporary market.

To even the books, the board sanctioned a quick-fire sale of star players, but that wasn’t enough to save them from the inevitable financial disaster. At the time of Ridsdale’s departure from the club, they owned the borrowers no less than a whopping £103m.

And then the slide started

The squad downgrade had an immediate refection on the pitch, as Leeds finished 15th in 2002/03.

But the worst was yet to come!

Performances plunged to even lower levels in 2003/04, and they finished second from the bottom.

The club’s financial irregularities resulted in a 15 point deduction in 2007, which condemned them to League One, England’s third tier football.

Let’s fast forward a few years. From 2007 to 2018, the club eventually returned to the championship but failed to come any closer to promotion.

The club saw changes in ownerships, managements, but a sense of stability remained far-fetched-that is, until 2018!

In a rather surprising move on June 15, 2018, Leeds United stunned the football world announcing they had appointed Marcelo Bielsa.

With three decades of coaching experience under his belt, the former Argentina national team manager is highly acclaimed in the football world for his unconventional tactics. Very few could have foreseen Leeds making such a high-profile managerial appointment.

A brave decision by Leeds

Despite being lauded by the likes of Pep Guardiola and Mauricio Pochettino, Bielsa hasn’t seen too much silverware and success.

His teams play an astounding brand of attacking football, but often, they fail to get the job done.

He never won a trophy in Europe, could not progress past the World Cup group stages with a star-studded Argentina side, and suffered a catastrophic 13 match spell at Lille just before occupying the managerial seat (or should I say bucket?) at Leeds.

Handing the Elland Road keys to Marcelo Bielsa was an ambitious move from Andrea Radrizzani, the club’s current owner, but there was no way to be certain that he is the missing piece of the puzzle.

Trying to impose methods to Bielsa’s madness could be a problem.

The 65-year-old craves operational freedom to implement his vision on the pitch.

Totally uncompromising, he famously left Lazio just after two days of his appointment as the Serie A side’s manager claiming I Biancocelesti were not able to meet his logistical demands.

He also had history of fall outs with his superiors at Chile, Athletic Bilbao, and Marseille.

So, there was a substantial amount of risk involved when the Leeds hierarchy decided to put their faith on the eccentric Argentine.

Much to the delight of the Leeds faithful, he turned out to be the chosen one.

The moral fibre of Bielsa

Bielsa made an immediate impact upon his arrival.

Leeds had a fantastic start to the 2018/19 Championship campaign and had spent most of the season in the automatic promotion zone.

But, the season ended in controversy and agony as Leeds missed out on the top two and then lost Derby County on the play-offs.

Derby accused Leeds of sending a spy at their training ground to observe The Rams training ahead of their Championship tie.

Bielsa retorted that he had spied on all of their opponents in the division. While Bielsa didn’t find any fault in doing that, the FA had a different view on the incident and fined Leeds £200k.

In another bizarre occasion, Bielsa ordered his team to willing concede a goal to Aston Villa. After Jonathan Kodjia collapsed on the pitch injured, the visiting side had stopped playing even though the referee allowed the play to go on.

Leeds capitalized on that situation and Mateusz Klich put the ball on the net to make it 1-0.

While the goal stood, Bielsa felt it wasn’t a fair decision and ordered his players to let Villa players score an equalizer. The Elland Road crowd watched on in sheer awe as the White shirts on the pitch stood idle to see Albert Adomah equalize.

From a neutral point of view, this might have been a great gesture of sportsmanship. But, the match ended in a draw and tarnished Leeds’ hope of an automatic promotion spot.

Withstanding the excruciating pain of a near miss, Leeds fans still believed Bielsa was the one to mend their broken hearts.

El Loco repaid the faith and made Leeds United undisputed champions of the 2019/20 Championship season. After a decade and a half, Premier League football would finally return to the greens of Elland Road.

Bielsa has a reputation for his extra-ordinary tactics and sharp attention to details.

His mornings would start in a local coffee shop, where he devised the day’s training plans with his staff. Then they would drive to the club’s training ground Thorp Arch and oversee practice sessions.

The rigorous training regimen is a key component of Bielsa’s approach to football.

His signature 3-3-1-3 formation warrants constant dedication from all players in the pitch.

Patrick Bamford hovers above them as a lone striker.

In attacking transitions, Leeds move to the previously mentioned 3-3-1-3.

Phillips drops even deeper to support center-backs Cooper and White. Bielsa wants both of his defenders to pass the ball comfortably. Ben White and Liam Cooper are his version Virgil van Dijk and Aymeric Laporte. Dallas and Ayling push forward to join Klich.

Hernández takes on a number 10 role, which is known as Enganche in Argentina.

An Enganche operates on the intermediary space between midfield and attack. He is the major creative outlet of the team. The 35-year-old has executed this role diligently having contributed 8 goals and 7 assists for Leeds last season.

Harrison and Costa acts as pure wingers at this phase and support Bamford in the attack.

The overcrowded flanks explain why 80% of Leeds’s attacking play channels through wider areas. Under Bielsa, Leeds focuses on playing as a cohesive unit rather than centering around certain key players.

10 players have scored a minimum of 3 goals for them last season, which reflects the coherence of the unit.

A return to the highest echelons of English football had been the ultimate goal of Leeds United ever since their relegation in 2004.

After a harrowing wait, Marcelo Bielsa has finally restored Leeds United as a Premier League club.

Bielsa’s high-tempo football is a joy to watch for any football fan, and we can’t wait to see him in the Premier League next season.