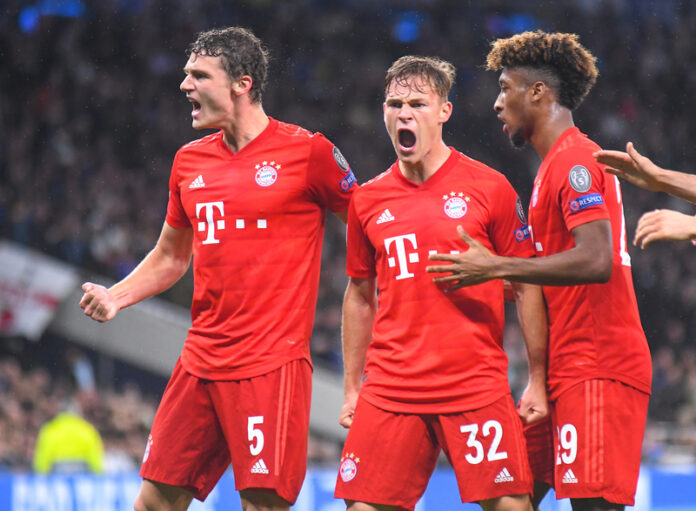 Bayern Munich have won the Champions League title for the sixth time after defeating Paris Saint-Germain 1-0 in the first final to be played without fans.

Kingsley Coman prolonged his former club’s wait for a Champion’s League title, as the French winger scored the solitary goal in a hard-fought final between Bayern Munich and Paris Saint-Germain.

The German Champions added a second treble to their list of honors, having done the same when they had won their previous Champions League trophy in 2013.

Paris Saint-Germain, who were playing the first Champions League final in their history, enjoyed a dominant start to the game and put the Bavarians on back foot.

But, all that went to vain, when Kingsley Coman’s header slipped past Keylor Navas right before the hour mark.

The goal proved to be enough to bring an agonizing silence to the city of Paris 1700kms away from the greens of Estadio da Luz in Lisbon.

On the other end, it also helped Bayern to replicate the success they had rejoiced under Jupp Heynckes in 2012/13.

Both sides put on some fierce displays of attacking football, on their way to the final.

So, everyone was expecting goalkeepers on either end of the pitch to have a very busy night. However, that didn’t turn out to be the case.

Even the likes of Kylian MBappe and Robert Lewandowski couldn’t escape the nervousness of playing such a high profile match, as they couldn’t exploit the chances that came their way.

A Paris Saint-Germain academy graduate did find the net in the 59th minute, but it made the PSG fans feel the butterflies in their stomach, instead of making them burst out in joy.

Coman came up through the ranks of the PSG academy, but he had left the French capital six years ago.

His senior career flourished in Bayern, and last night he scored the most important goal of his career for the German giants.

Both sides had chances

Thomas Tuchel’s men might feel themselves deprived of a penalty from an incident concerning Joshua Kimmich and Kylian Mbappe. But, Bayern held on to their nerves till the end and made sure the trophy returned to Munich for the sixth time.

PSG started the match stronger and made Manuel Neuer produce a world class effort to deny Neymar in the 19thminute.  The veteran German keeper ensured Neymar’s low drive stayed out of the net as his extended leg frustrated the Brazilian.

Bayern came even closer with a Robert Lewandowski strike shortly afterward. But, the Poland ace could only hit the woodwork.

But, PSG continued to exert their influence into the game and Jerome Boetang’s injury forced Hansi Flick to make an early substitution. Bayern was struggling to find a foothold, but they did come closer to breaking the deadlock again, when Lewandowski’s close range header was stopped by Navas.

As half time approached near, PSG unlocked Bayern’s high-line with a lofted ball. But, MBappe couldn’t make the most out of the situation as Neuer put his excellent sweeping skills to work and nullified the threat.

In the second half, Bayern got the crucial first goal as Coman kept his cool to guide the ball home from a Kimmich cross.

PSG tried to step up their attack in search of an equalizer. Marquinhos drew another excellent save from Neuer, while Neymar failed to keep his shot on target. But, they couldn’t restore parity and it turned out to be another disappointing night in Europe for the club.

While Bayern won its first final on Sunday since 2013, PSG has yet to lift the European Cup despite more than $1 billion being spent on players in nine years.

More than $500 million was spent on Neymar, Kylian Mbappe and Angel Di Maria.

This proves that while money can buy you stars, it can’t build a winning team.

Brings to mind Johan Cruyff’s comment – I never seen a bag of money score a goal!